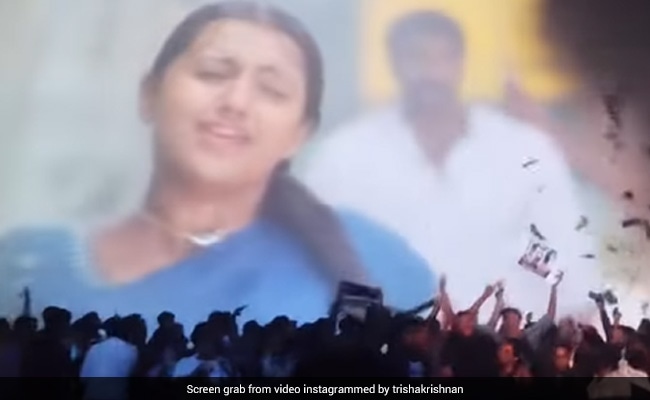 Trisha Krishnan received a whole lot of love when her first Telugu film Varsham, co-starring Prabhas, opened in theatres in January 2004. Around 18 years later, nothing much has changed. As the film re-released to mark 20 years of Prabhas in the film industry, fans went crazy when they saw Trisha on-screen again. Her “heart is full,” seeing the audience’s reaction from theatres. She shared a video of fans dancing and whistling as the film’s song Nuvvasthanante plays in the background. “18 years later…A re-release…My first Telugu film…Still feels like yesterday,” wrote the actress sharing how overwhelmed she is. Trisha added, “Just goes to prove ‘films are forever’ and I repeat for the 94,56,743 time ‘I AM because of you all.’ My heart is full…Varsham (red heart icon).”

Trisha was a model before she started her acting career with a minor role in 1999 movie Jodi. Before Varsham, she worked in a couple of Tamil movies such as Mounam Pesiyadhe, Manasellam, Saamy and Laysa Laysa.

Her latest film Ponniyin Selvan-I is a box office blockbuster. Recently, the makers of the film hosted a party to celebrate its success and Trisha, along with director Mani Ratnam and co-star Aishwarya Rai Bachchan, attended the bash. Trisha even shared a video featuring photos of herself with the cast of the film. “The vibe is caption enough,” she wrote and added a red heart and a fire icon.

Trisha is known for her performances in films such as Yennai Arindhaal, Endrendrum Punnagai, ‘96, Ghilli, Varsham, Athadu, and Petta. She made her Bollywood debut with Akshay Kumar’s 2010 movie Khatta Meetha.

Jaya Bachchan And Kajol Arrive In Style At Uunchai Screening