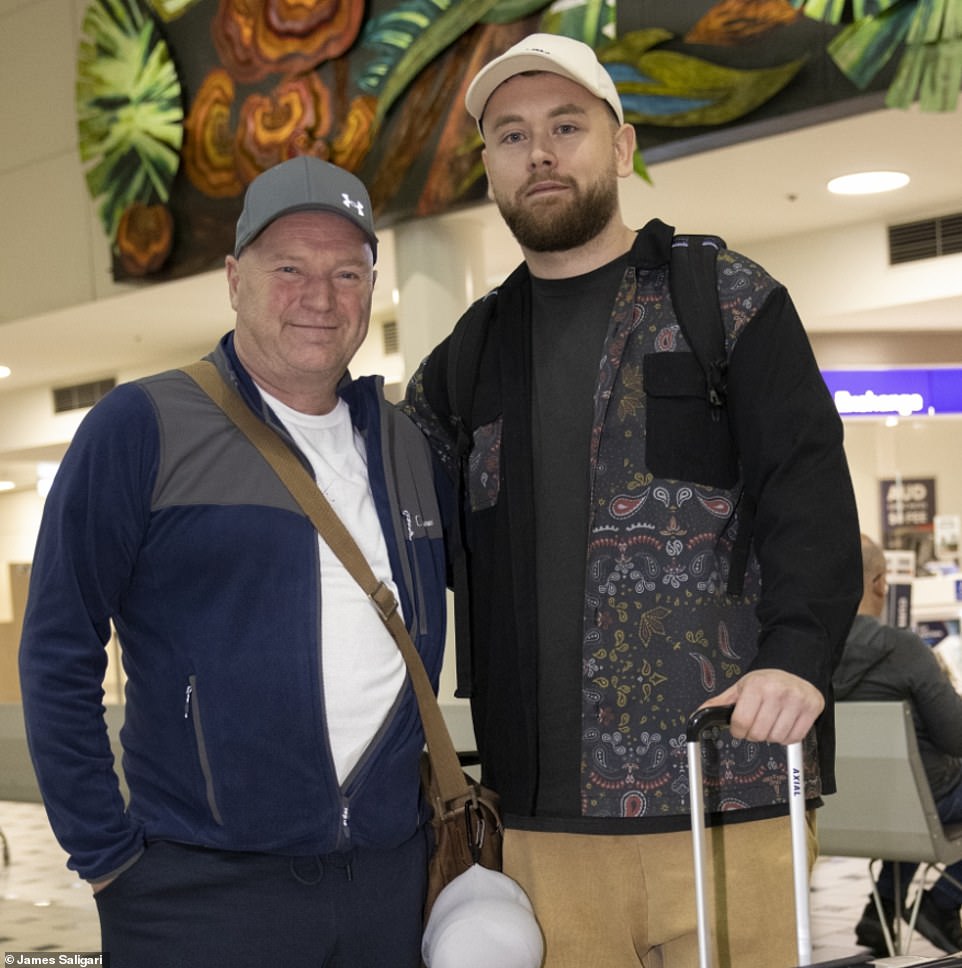 The families of the I’m A Celebrity… Get Me Out Of Here! stars have been touching down in Brisbane ahead of the first eviction on Friday night.

Hosted by Ant McPartlin and Declan Donnelly, the show has seen 11 unsuspecting stars live in the outback for two weeks of creepy crawlies and Bushtucker Trials.

Days later, Matt Hancock and Seann Walsh also made their way into  the Australian jungle as surprise late arrivals.

Now, as they count down the days to finding out who will be crowned King or Queen of the Jungle in the first series held Down Under for two years, their loved ones have started arriving in anticipation – so can you guess who they’re here to support?

Who could they be? 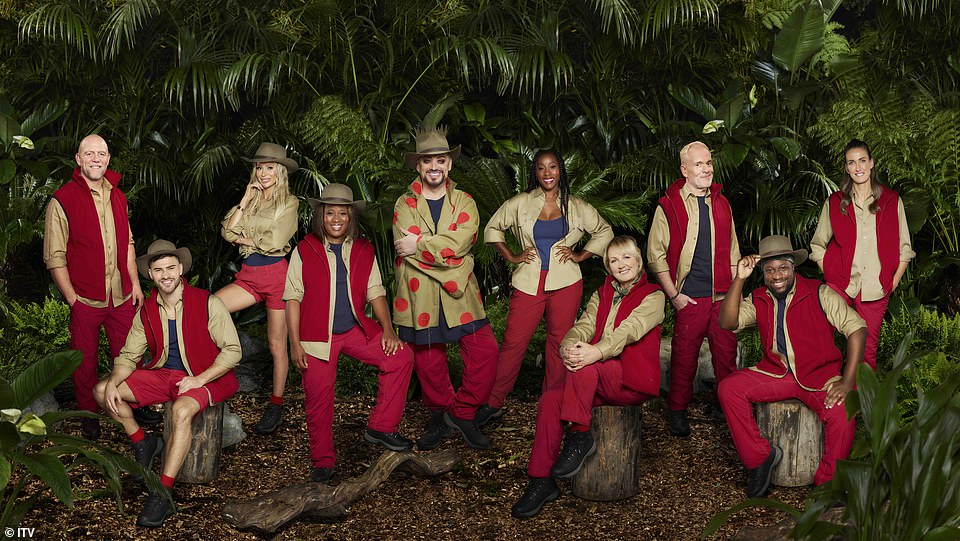 Originally a roster of 12, Love Island’s Olivia Attwood was forced to withdraw after just 24 hours due to needing medical assistance, later revealing exclusively to MailOnline and The Mail On Sunday that she was forced to leave after blood tests showed she was dangerously anaemic.

Previously the campmates’ loved ones and the evicted stars stayed at the iconic Palazzo Versace resort, which many fans will be familiar with as it features in the Coming Out show. 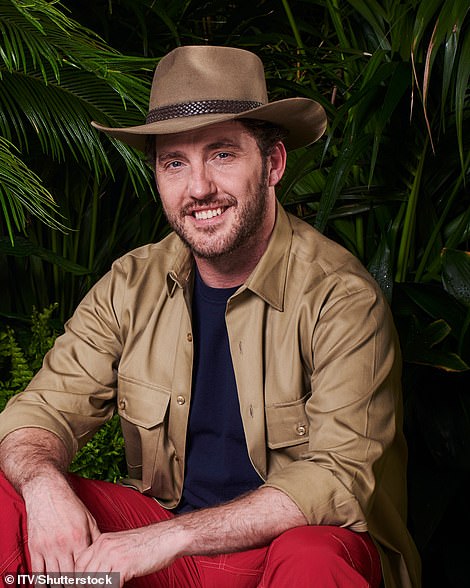 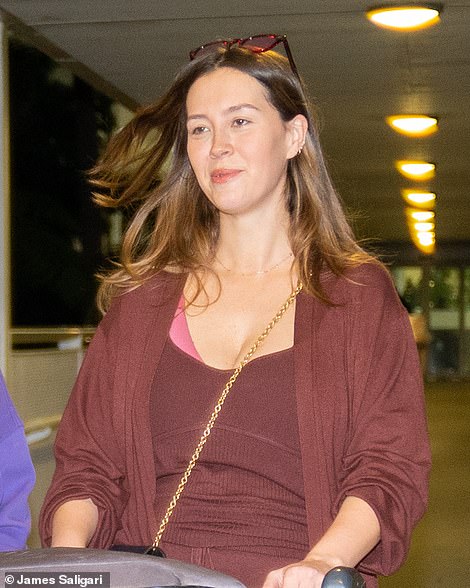 Reunited: Seann Walsh ‘s pregnant girlfriend Grace Adderley appeared happy to be back in the same country as her boyfriend, as she flashed a broad smile while walking through the arrivals terminal

Seann Walsh‘s pregnant girlfriend Grace Adderley appeared happy to be back in the same country as her boyfriend, as she flashed a broad smile while walking through the arrivals terminal.

Speaking at Brisbane airport on Thursday evening local time, Grace said: ‘Seann is literally laughing all the time and because his laugh is so loud even the neighbours messaged me like ‘oh we really miss hearing Seann laugh in the morning.’

‘He is a child trapped in a 36-year-old’s body but also like an old man as well complaining about his back.’

On Seann’s positive relationships with his fellow campmates, she added: ‘He gets on with everybody. 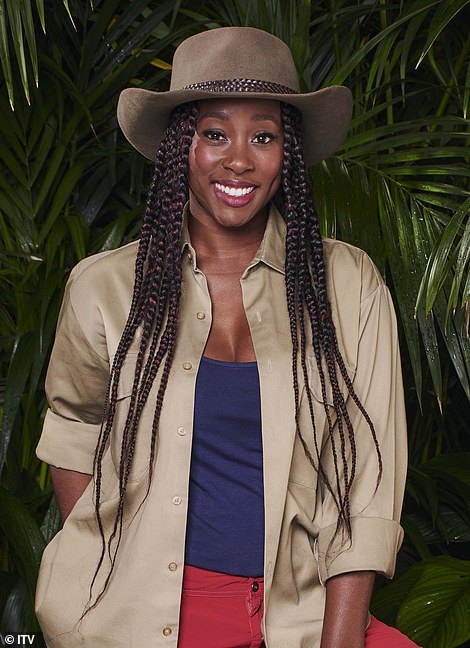 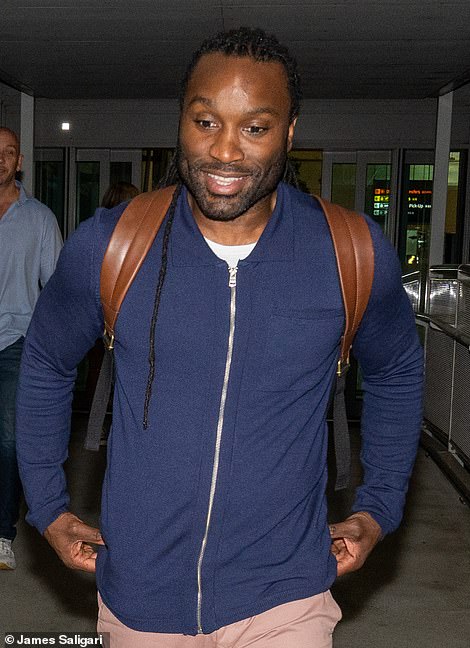 Scarlette’s brother Stuart touched down to see his sister this week.

Scarlette’s brother Stuart touched down to see his sister this week.

The Place In The Sun presenter previously said her brother, who is also a housing expert, had taught her how to be herself on camera.

She revealed: ‘We do have quite a difference in taste, which sometimes works out and sometimes maybe doesn’t go so well.’

Stuart explained: ‘When we both started working together I had been in property longer than Scarlette. I had learned that you don’t always redevelop and renovate property and do everything that you would like.

‘You have to take into consideration the potential buyer, so when Scarlette first came on board it was like a child at a sweet shop.

‘She wanted to put her own individual flair and style and taste in properties.’ 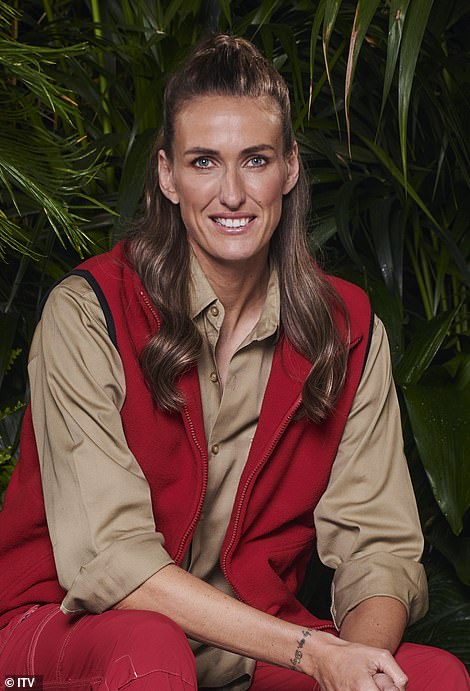 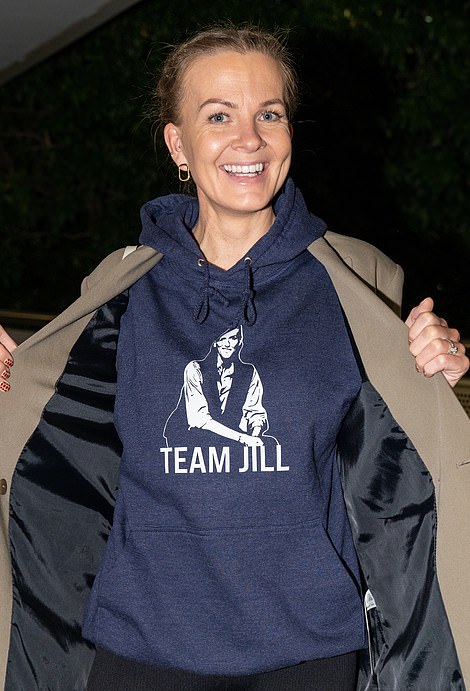 Shelley and Jill have been engaged since March 2020 and have been together for five years.

Shelley and Jill have been engaged since March 2020 and have been together for five years.

Her sister is Jill’s former teammate Rachel Unit and she used to go around with the team watching her fiancé and sister’s games.

Shelley, who owns a Manchester coffee shop with Jill, sweetly sported a ‘team Jill’ hooded jacket with a picture of her other half on the front.

The couple, who have been in a relationship for around six years, have kept their wedding plans under wraps.

In December 2020, Jill told her followers: ‘No engagement party as planned but hoping for an even bigger one next year! Feeling very grateful for our 4th Christmas together here’s to many more @shellyunitt.’

Matt’s girlfriend Gina Coladangelo has flown in to support the Tory MP and recently told MailOnline she’s been ‘missing’ her partner and watching the show every night to see him in action.

When asked if she’s been impressed by Matt’s performance on the show so far, after he was voted to do six trials, she said: ‘It would be difficult not to be impressed, he has done really well. He’s made of tough stuff.’

It comes after Hancock confessed to falling in love with her when quizzed by campmates over breaching social distancing rules when they were caught kissing in his ministerial office last year.

The passionate clinch marked the end of Matt’s 15-year marriage to ex-wife Martha, with whom he shares his three children. 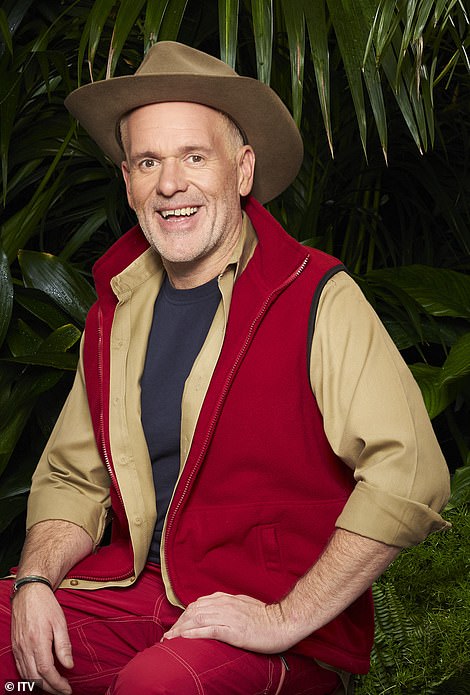 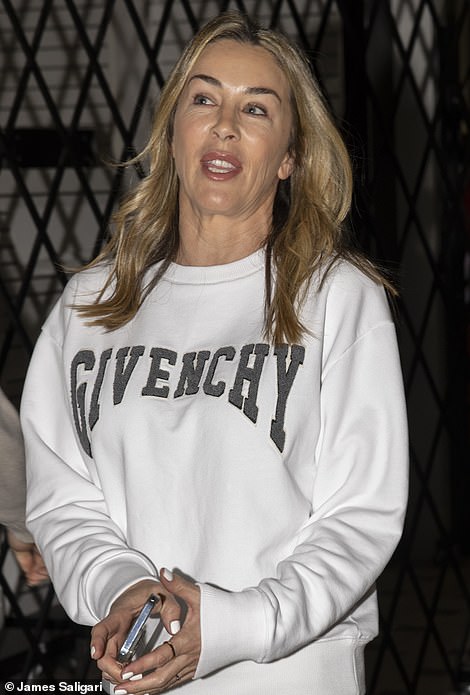 Chris is being met by girlfriend Tiffany Austin, who works in music management.

Chris is being met by girlfriend Tiffany Austin, who works in music management.

When she touched down in Australia this week she gave her travelling attire a designer touch in a Givenchy jumper and sported a Christian Dior bag.

Tiffany and Chris began dating in 2015 and are said to have met when he was enjoying a career between in Beverly Hills. She has previously worked with Chris’ jungle camp mate Boy George.

Tiffany is Chris’ first serious girlfriend since he dated TV producer Sophie Waite in his Radio 1 days. After splitting with Sophie he was linked to his Jesus Christ Superstar co-star and Spice Girl Mel C, before growing close to the Irish actress Aoibhinn McGinnity.

Owen will be supported by his mother Polly, dad Tim and brother Louie.

Speaking to MailOnline, Polly admitted some of her close friends have been awkwardly left in awe of his abs during the jungle shower scenes.

She said: ‘He does like taking his top off but if you work hard on your body and your physique then why not? Some of my friends have made comments and said I shouldn’t look really him being your son… it is what it is!’

Since Owen’s newfound fame, many fans have stumbled across his brother Louie, a model and photographer who has worked for the likes of Puma and Boohoo. 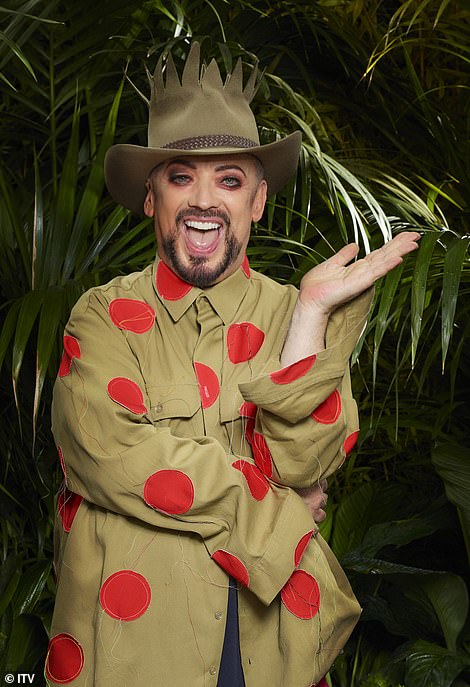 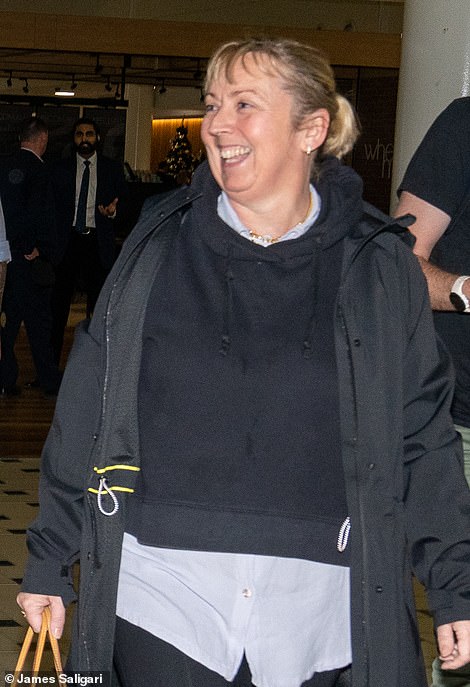 Boy George’s sister Siobhan O’Dowd flew out to Australia so she can greet her famous brother when he leaves I’m A Celebrity… Get Me Out Of Here!

Boy George’s sister Siobhan O’Dowd flew out to Australia so she can greet her famous brother when he leaves I’m A Celebrity… Get Me Out Of Here!

Siobhan O’Dowd admitted she was filled with worry after watching the singer, 61, break down in tears following Matt Hancock’s arrival in the jungle.

She told The Sun: ‘I’m so proud of George, he said how we all felt [on Wednesday] and it was hard to see him so upset.

‘I will be there waiting for him when he comes out. Mum and I are cheering him on every night.’ 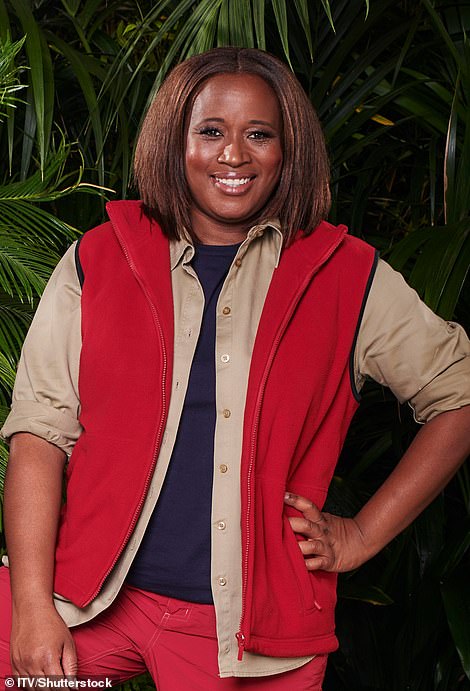 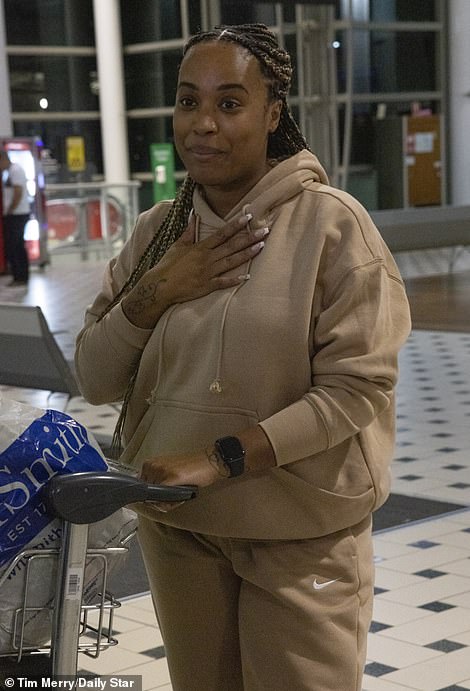 Charlene’s sister Carina White has flown to be by her side after defending her sister’s maternal actions.

Charlene’s sister Carina White has flown to be by her side after defending her sister’s maternal actions.

Speaking to The Mirror she said that Charlene taking control of the cooking is her ‘love language’ and simply a way of showing she cares.

Carina told how despite having the support of family and friends, Charlene stepped up to be a ‘mother figure’ to her siblings following their mother Dorrett’s death from bowel cancer in 2002 when Carina was 17 and their brother was just seven.

She said of the Loose Women star: ‘Watching her on I’m A Celeb doing what comes naturally to her – being proactive, cooking and assigning tasks to people – reminds me of the many weekends we spent in the kitchen with our Mum preparing Sunday dinner, which would always be some sort of Jamaican cuisine.’

Carina added that feeding and taking care of people is simply ‘what Charlene does’. 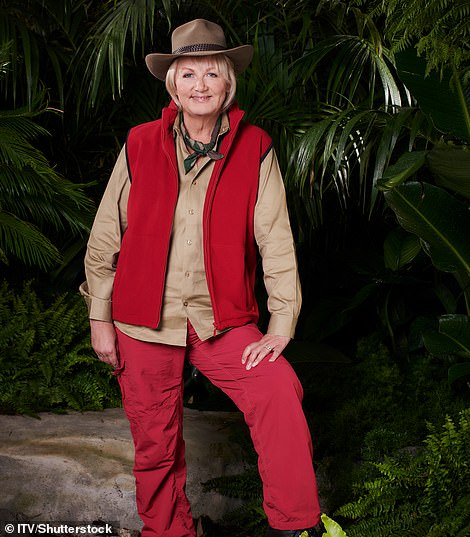 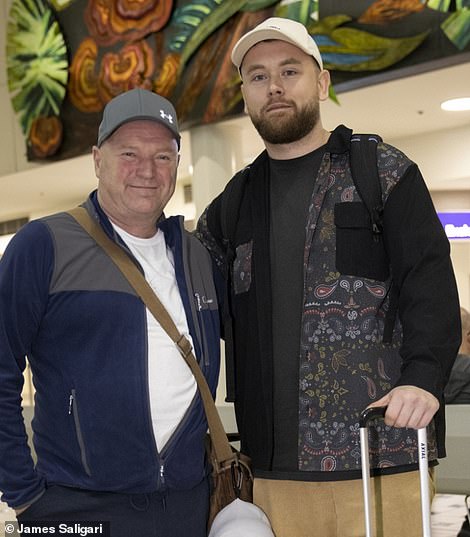 Sue will be greeted by her husband Brian Owen, who she met on the set of Corrie when he was working as a lighting technician.

The actress – who plays Eileen Grimshaw in ITV soap – lives in a cosy house with Brian and their adorable dog.

Also supporting Sue will be her 24-year-old son Elliot, who she shares with her ex-husband, actor James Quinn.

James actually appeared on Corrie himself. He has had four different roles on the soap since 1989 – but his most recent and notable as DS Willets.

While no one has flown to Australia to greet Mike yet, watching him during his time in the jungle back home will be his wife Zara Tindall – the late Queen’s granddaughter.

Zara, 41, is the daughter of Anne, Princess Royal, and Captain Mark Phillips. She is the niece of King Charles III and is 20th in the line of succession to the British throne.

Mike has previously told how Australia is special to him because it is where he met his now wife Zara in 2003. The couple met at at the Manly Wharf bar in Sydney during the Rugby World Cup. 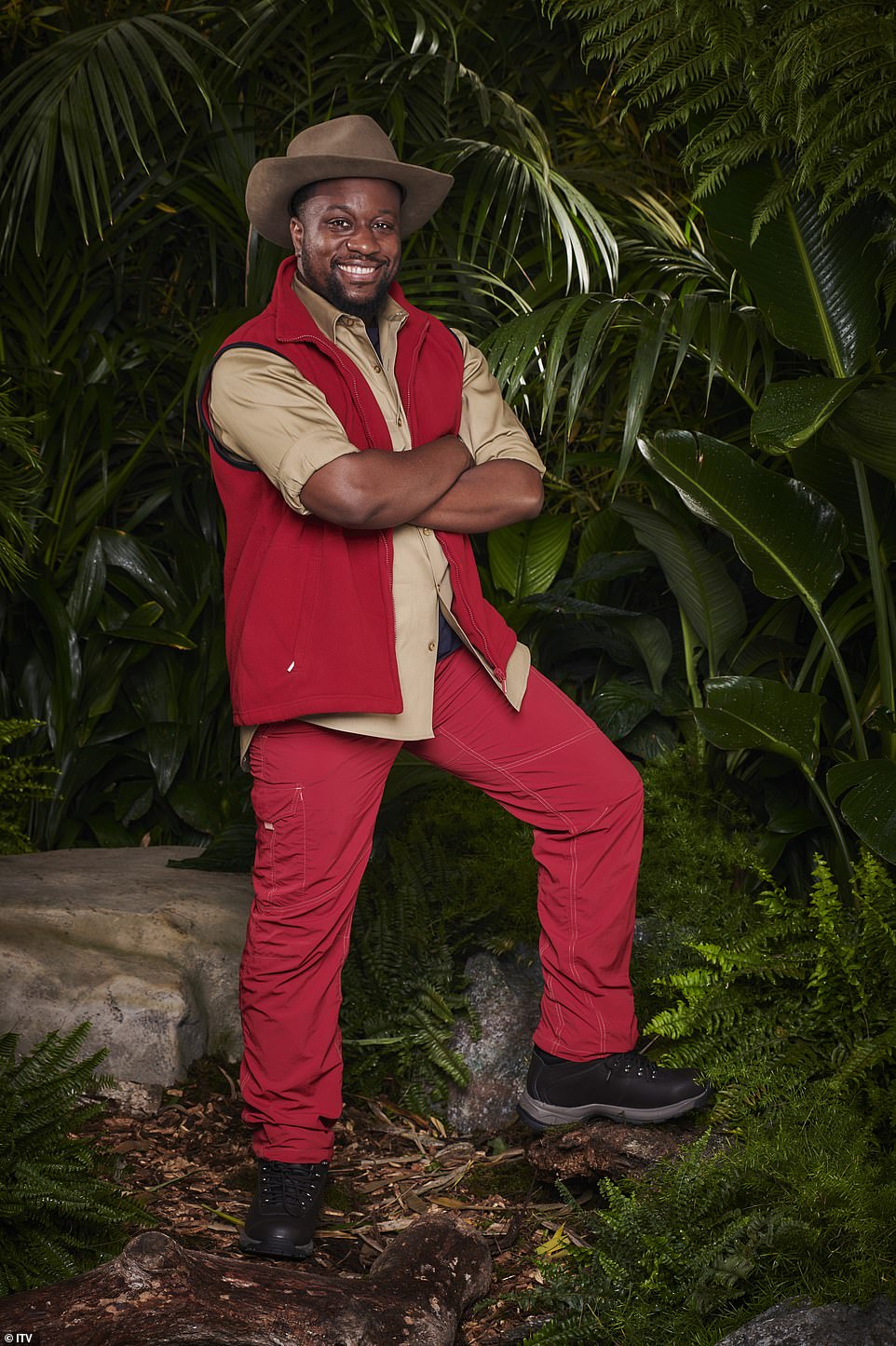 Together: During his stint on I’m A Celebrity Babatunde will supported by his Jamaican wife Leonie watching at home. The pair are rarely seen together

During his stint on I’m A Celebrity Babatunde will supported by his Jamaican wife Leonie watching at home. The pair are rarely seen together.

They tied the knot in September 2015 and share a son Judah.

Aside from comedy, Babatundé also has acting work under his belt. In 2011, he played Sam, the specialist nurse who tended to Tanya Jessop whilst she was having her first chemotherapy session in EastEnders.

He has also had starring roles in Law & Order: UK, Doctor Who, Waking the Dead and New Tricks.

Little is known about Seann’s newest girlfriend Grace Adderley and the story behind their relationship.

I’m A Celebrity 2022: All you need to know about this year’s show