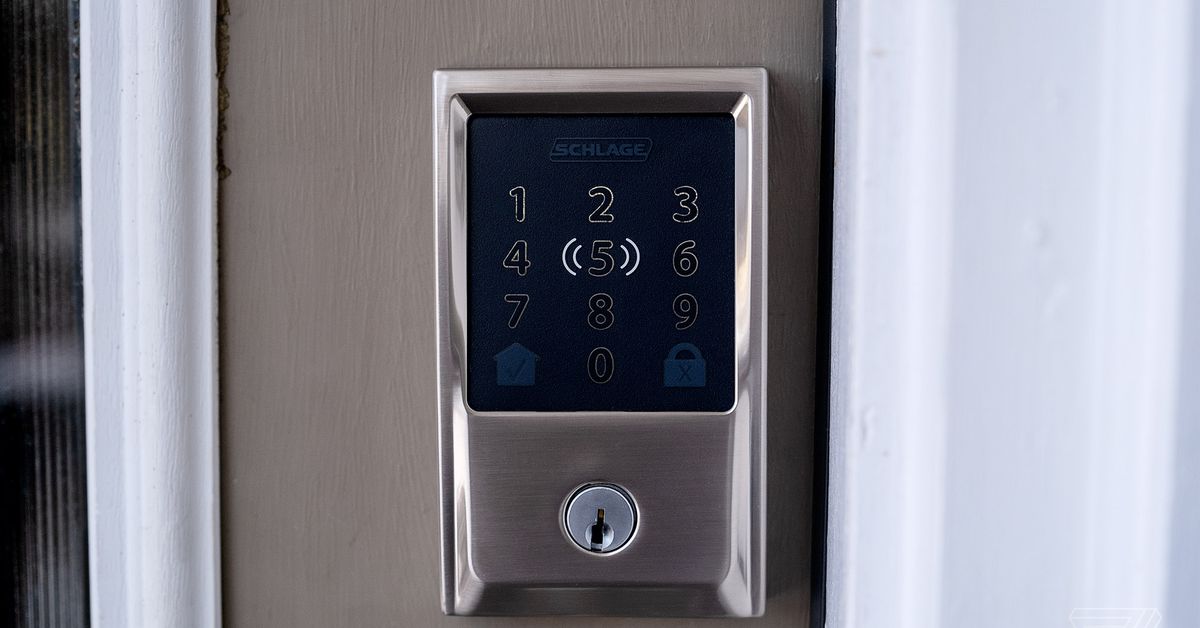 The Schlage Encode Plus, the popular Home Key-enabled smart lock, will not get upgraded to support Matter. Schlage told The Verge that this is due to several factors, including changes in the spec since the product was manufactured. It also confirmed that none of its current smart locks will support Matter. Instead, Schlage plans to introduce a new Matter-enabled smart lock in the future but did not provide a timeline for a release.

When the Encode Plus launched at CES 2022, Schlage said the $330 Thread-enabled smart lock should have the hardware on board to support Matter. “But we still don’t know where those tech specs will land,” Donald Beene, senior product manager for Allegion (parent company of Schlage), told The Verge in January. It appears they landed too far off for the Plus.

Thread is a key pillar of Matter. Initially, it was thought that newer Thread products would have an easy upgrade path to Matter. However, as Matter has developed over the last three years, it has undergone significant changes.

“The Matter standard continued to evolve after the initial release of Encode Plus earlier this year, despite the product having Thread on board,” Dave Perozzi, general manager, Schlage Residential Solutions and Allegion Home, said in a statement to The Verge. “From a technical and user experience standpoint, it became apparent introducing a new, dedicated Matter-enabled product in lieu of updating our current product lineup would ultimately net the best results for our customers.”

Perozzi went on to say that, while Schlage is still actively involved with Matter, “moving beyond walled garden architectures will take time.” He said the different speeds at which the Big Tech platforms are adopting Matter and changes in SDKs and in how its “partners are adapting and changing products” were among the factors that led them to decide to work on a new lock to support Matter.

Amazon is likely one of those tech partners Schlage is referring to. Schlage’s locks work closely with Amazon products — including integrations with Ring and Amazon Key. Amazon announced earlier this month that it wouldn’t enable Thread on its Matter controllers until next year, starting instead with Matter over Wi-Fi. It is also only supporting smart plugs, switches, and bulbs at first, not door locks.

Matter is a new smart home interoperability standard that provides a common language for smart home devices to communicate locally in your home without relying on a cloud connection. It uses Wi-Fi and Thread wireless protocols and, at launch, will include smart sensors, smart lighting, smart plugs and switches, smart thermostats, connected locks, and media devices including TVs.

Amazon Alexa, Google Home, Samsung SmartThings, and Apple Home are some of the big smart home platforms signed on to support Matter, and we expect to see updates arriving on these platforms over the coming months.

Both Yale and Level Home have announced upgrade paths for existing locks, leaving only Schlage’s current customers out of luck. Schlage’s Encode Plus has been difficult to find in stock ever since it launched, which Schlage told The Verge in August was due to supply chain constraints.

Schlage is not the only company to have gotten out ahead of the Matter specification with Thread-enabled hardware. Both Nanoleaf and Belkin Wemo have Thread products that they’ve said won’t work with Matter.

Nanoleaf’s Essentials line of Thread-enabled A19 bulbs and light strips, which launched in 2020, can’t be updated to the new standard as they require a new chip, according to CEO Gimmy Chu. Instead, the company is launching new Matter-over-Thread versions in early 2023.

Belkin Wemo released three products that work over Thread this year, none of which will work with Matter. Their smart dimmer switch, smart plug, and scene controller only work with HomeKit over Thread, not Matter over Thread. “When Matter launches later this year, we will bring to market new switches / dimmers that support Matter over Thread,” Cassie Pineda, senior global communications manager at Belkin, told The Verge in August.

“Some devices may have enough flash or RAM memory to support the current Matter implementation, whereas others might not.”

I asked the Thread Group what had changed that was making it harder for existing products to upgrade to Matter. “While we can’t comment on products specifically, one element for consideration as part of the upgrade is Matter’s increased memory requirements. Some devices may have enough flash or RAM memory to support the current Matter implementation, whereas others might not,” Jonathan Hui, VP of technology at the Thread Group, told The Verge in an email.

While Matter is officially here, you can’t buy Matter devices yet. But they are coming soon. If you are considering getting smart home products that will support Matter, my advice is to hold off on buying any Thread-enabled products that are available today unless the company guarantees the device will be upgraded. So far, only a handful of device makers have committed to this in existing products, including Eve Systems, which says its entire Thread line will be updated starting next month and into 2023.