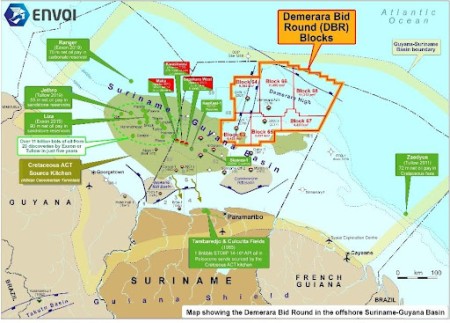 After a series of dry wells were drilled in the Guyana-Suriname Basin from the 1960s through to the 1980s, offshore Guyana and Suriname were ignored by global energy companies. Interest was reignited by ExxonMobil’s discovery of the Liza oilfield in the 6.6-million-acre Stabroek Block offshore Guyana in 2015. That was followed by a swathe of over 30 world-class discoveries in the block, indicating the basin holds more recoverable hydrocarbon resources than the U.S. Geological Survey estimated. The USGS previously rated the sedimentary formation as the world’s second most prospective offshore basin, with it believed to share geology with offshore West Coast Africa, notably the Tano Basin, where the world-class Jubilee oilfield is located. Guyana’s massive oil boom, which keeps gaining momentum and delivering a tremendous economic windfall, sees the government in neighboring Suriname chafing at the bit to exploit the vast hydrocarbon wealth thought to exist in the impoverished country’s territorial waters. Suriname is poised to become one of the world’s hottest offshore oil frontiers.

Since early 2020 there have been a number of oil discoveries in offshore Suriname. The first in offshore Suriname Block 58 was made by Apache and 50% partner TotalEnergies in early January 2020 at the Maka Central-1 well, which found 164 feet or 50 meters of light oil and gas condensate play. The optimism surrounding the first discovery in Block 58 saw investment bank Morgan Stanley announce that the block could contain 6.5 billion barrels of recoverable oil resources, with it believed to contain the same petroleum fairway running through the nearby Stabroek Block. By early 2022 Apache and TotalEnergies had made five commercial oil discoveries in Block 58. The partners are drilling the Awari prospect in Block 58, which is roughly 17 miles north of the first discovery in the block at the Maka Central-1 well.

In December 2020, Malaysia’s state-controlled oil company Petronas, which is the operator, announced that it and 50% partner Exxon had discovered hydrocarbons at the Sloanea-1 exploration well drilled in Block 52 offshore Suriname. Malaysia’s national oil company continues to evaluate the potential of the discovery and whether it is commercially viable to exploit. Petronas holds a 100% interest in Block 48, where it is also the operator and a 30% stake in Block 53 offshore Suriname. In late-August 2022, Apache announced the first oil discovery in Block 53, which is adjacent to Blocks 58 and 52, at the Baja-1 exploration well. Apache, which holds a 45% interest in Block 53, is the operator with the remaining 25%, after accounting for Petronas’ 30% stake, being held by Spanish energy company CEPSA. Apache has requested a one-year extension to the exploration period allowed under the production sharing contract from Staatsolie Suriname’s national oil company and hydrocarbon regulator. If approved, that will provide Apache with the additional time required to conduct appraisal drilling and other exploration activities to determine the size and scope of the discovery.

Global energy supermajor Shell, in October 2022, announced the discovery of oil at the Zanderji-1 well in Block 42. Shell which holds a 33.3% interest in the block, is the operator, while partners Hess and Chevron have a one-third interest each. According to partner Hess, the discovery is currently being evaluated to determine whether the working petroleum system found is commercially viable to exploit. Block 42 is located to the north of offshore Suriname Blocks 58 and 53 while being close to the prolific Stabroek Block in offshore Guyana. This latest hydrocarbon discovery in offshore Suriname underscores the considerable potential oil wealth that exists in the former Dutch colony’s territorial waters.

The national government in Paramaribo is feverishly seeking to attract further investment from the global energy companies needed to explore and develop offshore Suriname. This includes establishing some of the energy industry’s most generous production sharing contracts or PSCs. The 30-year PSCs, which are up to 10 years longer than equivalent contracts offered by other Latin American countries, provide oil companies with considerable time to successfully develop and exploit any hydrocarbon discoveries made. Paramaribo has also established a low royalty rate of 6.25% in order to attract urgently needed foreign energy investment. That rate, while higher than the 2% put in place by Guyana’s government for the Exxon-led consortium exploiting the Stabroek Block, is among the lowest in Latin America. Oil royalties in Argentina amount to 12% of wellhead production. In Brazil, a 15% royalty is levied on the value of the oil produced, while they from 8% to 25% in Colombia and 12.5% to 18.5% in Ecuador.

The appeal of offshore Suriname is amplified by the fact that the oil discovered to date has been light to medium with low sulfur content. That means it is cheaper and easier to refine into high-quality fuels, and there is a low carbon cost associated with its extraction compared to the heavier sourer oil grades produced in Venezuela, Colombia and Ecuador. Projects in Suriname have an estimated breakeven price of $40 per barrel Brent, which is expected to fall further as development ramps up, and vital infrastructure is put in place. For these reasons, offshore Suriname is an appealing investment jurisdiction for international energy companies, particularly when it is considered that many Latin American countries have far higher breakeven prices.

According to Staatsolie, data is has obtained points to offshore Suriname containing up to 30 billion barrels of recoverable oil equivalent resources. National oil company and industry regulator Staatsolie recently launched the 2022/2023 Demerara Bid Round with bids closing on 31 May 2023. This is comprised of six blocks, 63 to 68, in offshore Suriname located to the northeast of the existing deep-water blocks where discoveries have been made.

Staatsolie the acreage is sparsely explored, and existing seismic and other data points to the region holding considerable hydrocarbon potential. This will build off the shallow water bid round completed in late 2021 where three blocks were awarded to Qatar Petroleum, TotalEnergies and Chevron.

If Paramaribo can appropriately exploit that considerable hydrocarbon potential, it will deliver a significant economic windfall for the deeply impoverished South American country of roughly 600,000 people. For that to occur, many obstacles need to be overcome. The most immediate being Apache and TotalEnergies decision to delay making a financial investment decision for exploiting Block 58 because of anomalies between seismic and drilling data.

By Matthew Smith for Oilprice.com

Read this article on OilPrice.com