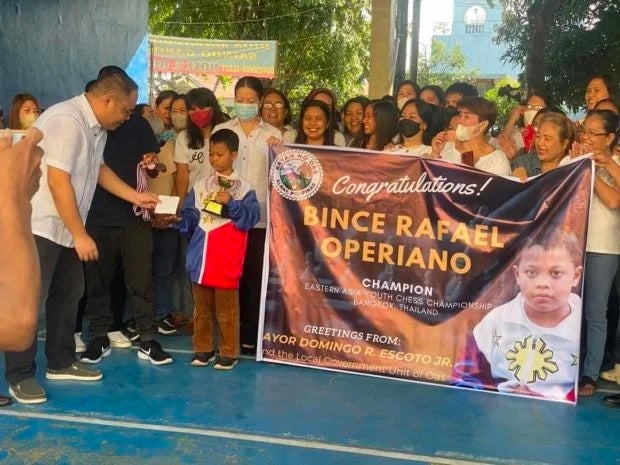 Oas town officials, led by Mayor Domingo Escoto Jr., gave the Operiano a plaque and a cash reward of P20,000 for his achievement. (CONTRIBUTED PHOTO)

The Oas municipal government awarded him a plaque of recognition, and Mayor Domingo Escoto Jr. gave him a cash reward of P20,000 courtesy.

“It’s an honor for us that we have a champion in the name of Bince Rafael. With his achievement, Oas town was put on the map, particularly in the field of chess,” Escoto told the Inquirer in an interview. “We are happy for him and will give our full support in his future competition.”

According to the mayor, Oas will allocate a budget to finance and support Operiano in local and international tournaments in 2023.

Operiano’s father, Ben, said they were elated by the recognition given by the officials.

“This is just returning the favor, especially for the help they’ve extended to us in order to join and win the game,” Ben said.

Meanwhile, the Albay Provincial Board will meet Operiano to give recognition to his feat.