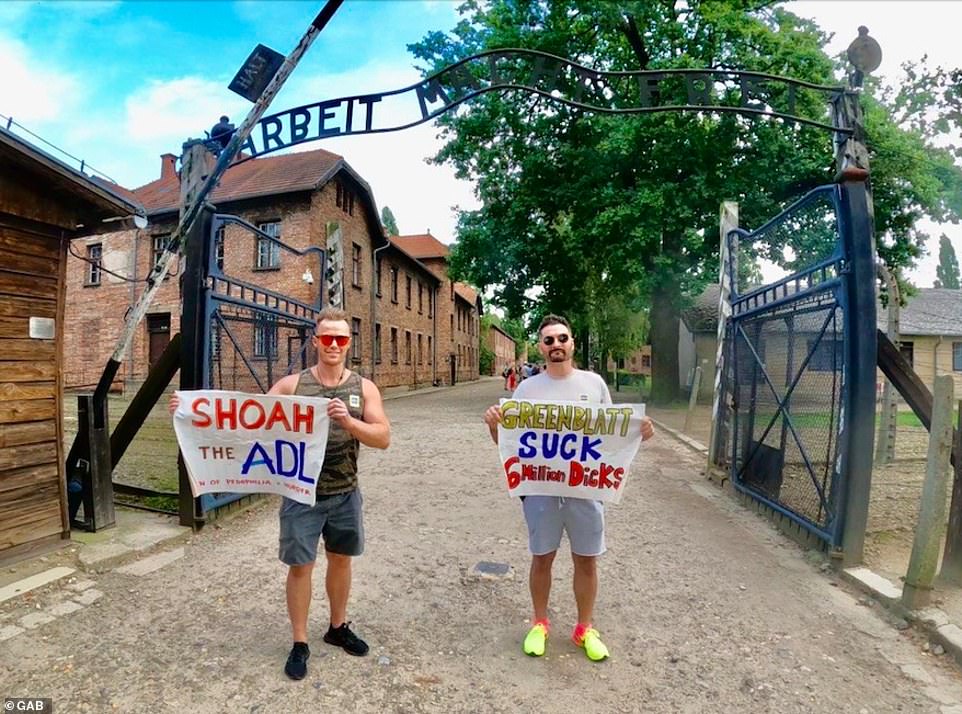 A notorious American anti-Semite who was arrested at Auschwitz has been accused of abusing US troops and telling black soldiers to ‘stay away from white women’ in a video shot at a mall in Poland.

The horrific video showed a man recording himself hurling racist and homophobic vitriol at a group of U.S. soldiers, who appear to show considerable restraint while ignoring their abuser.

After going viral on social media, many people including YouTuber Jamesons Travels, accused Jon Minadeo Jr. of being the man behind the camera.

And after the accusations were thrown his way, the known anti-Semite posted a link to the clip on the right-wind social media site, Gab.

Instead of denying that he was the one behind the vile abuse being dished out in the Polish shopping mall, he encouraged his fan base to ‘wreck’ the YouTuber’s comments. Minadeo wrote ‘BOOMER ALERT!!! WRECK AND GAS COMMENTS LETS F*****G GOOOOO!!!’

Numerous internet sleuths also accused Californian Minadeo, 39, of making the vile video – as many recognized him from other viral videos attacking a number of ethnic minorities.

Many were quick to note that it sounded like the ‘same guy’ from a video where the founder of American extremist group Goyim Defense League was abusing a south Asian man, telling him that he’s ‘f**king up Europe.’

Just months ago, Minadeo was arrested in Poland for wearing a swastika necklace and posing with vulgar banners that taunted Jewish leaders outside the front gate of Auschwitz. During World War II, Auschwitz operated as a concentration camp where an estimated 1.1 million people were exterminated.

Notorious American anti-Semite, Jon Minadeo Jr, who was arrested after demonstrating outside Auschwitz in September (pictured) has been accused of abusing US troops and telling black soldiers to ‘stay away from white women’ in a video shot at a mall in Poland 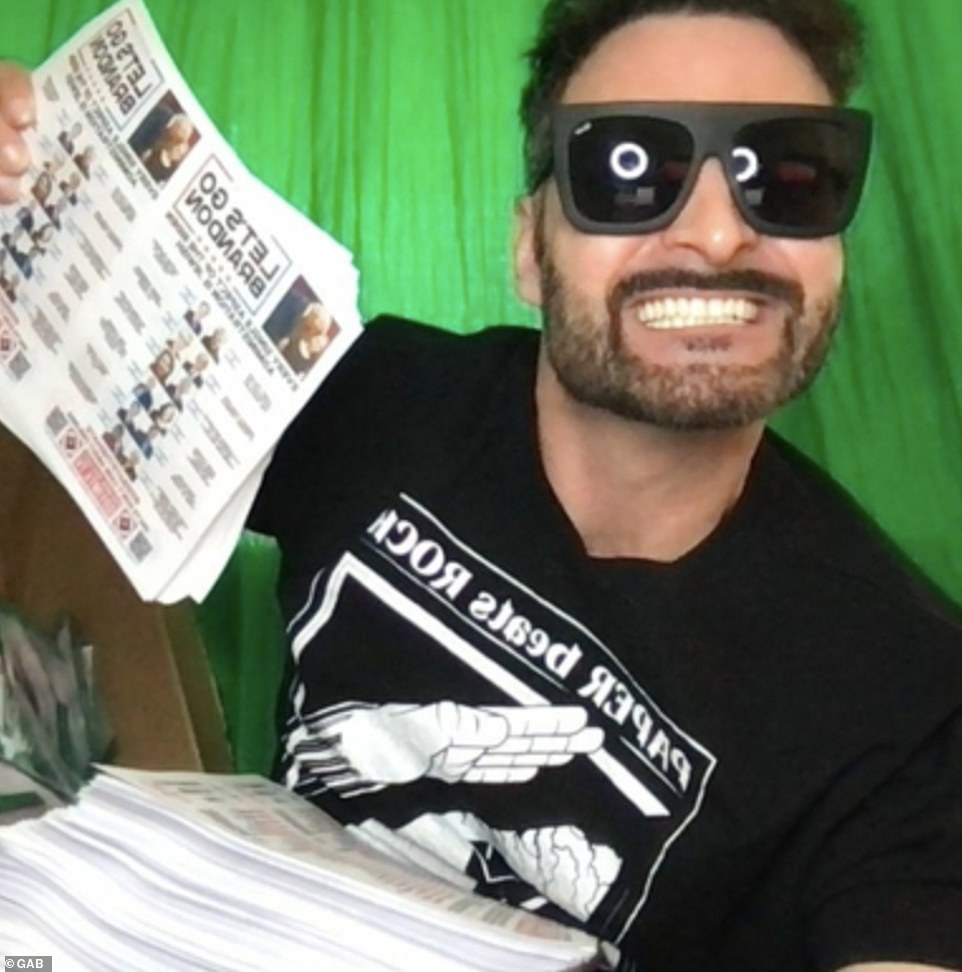 A video, which surfaced on YouTuber Jamesons Travels account and on Twitter, has been credited to Minadeo who posted a link to Jamesons Travels video on Gab, an American alt-tech microblogging and social networking service known for its far-right userbase 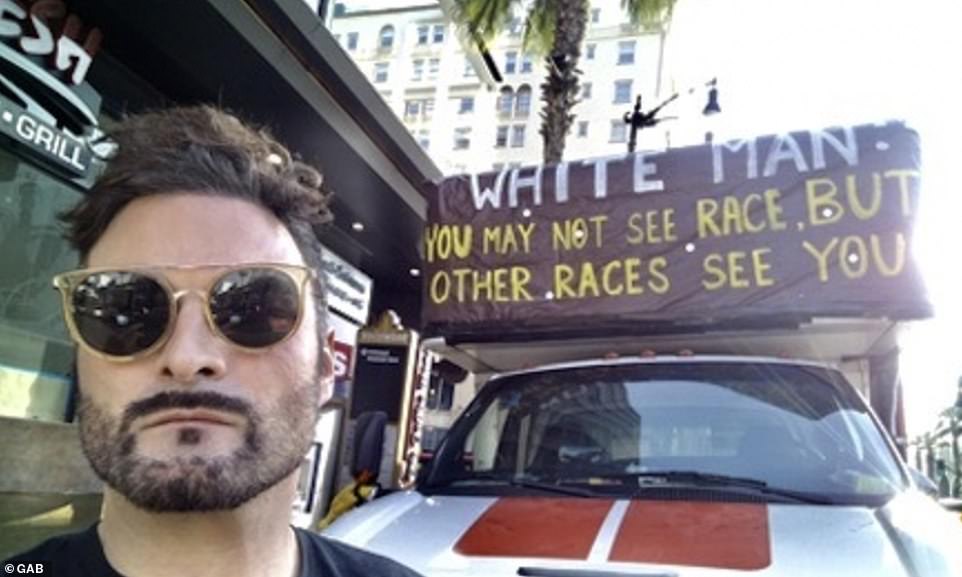 Another said referring to Minadeo: ‘Tentatively landing on this fine individual as the gentlemen in the video. And no, I’m not worried if this is the wrong neo-Nazi. Lol.’

Twitter users lauded the soldiers for their restraint one user said: ‘To the American soldiers – I could not be more proud of you if you were my own sons.

‘You walked with dignity and courage. Thank you so very much for your service and your honor. You make the United States proud every day.’

Another said: ‘That just pissed me off. He has nothing else better to do but be racist.

‘He decided to pick a fight with the most important people of our nation. He was salty from the start when they were ignoring him so he started to be even more racist.’

The horrific clip shows the moment four men wearing Army gear with the American flag exercise restraint after being confronted by the man inside a Polish shopping mall. 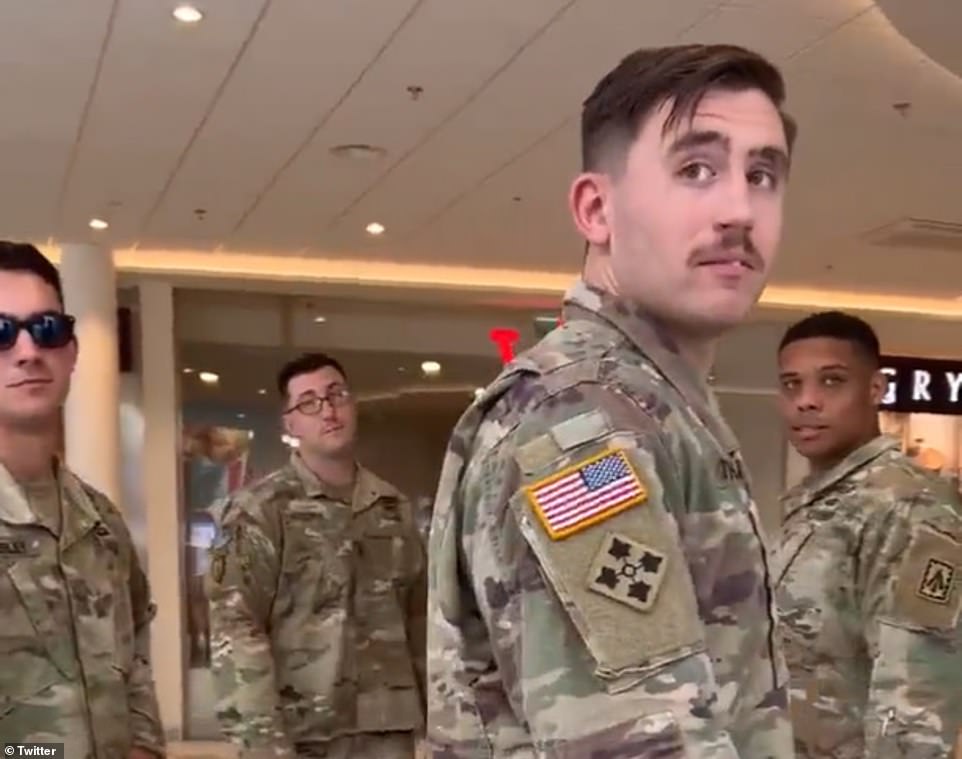 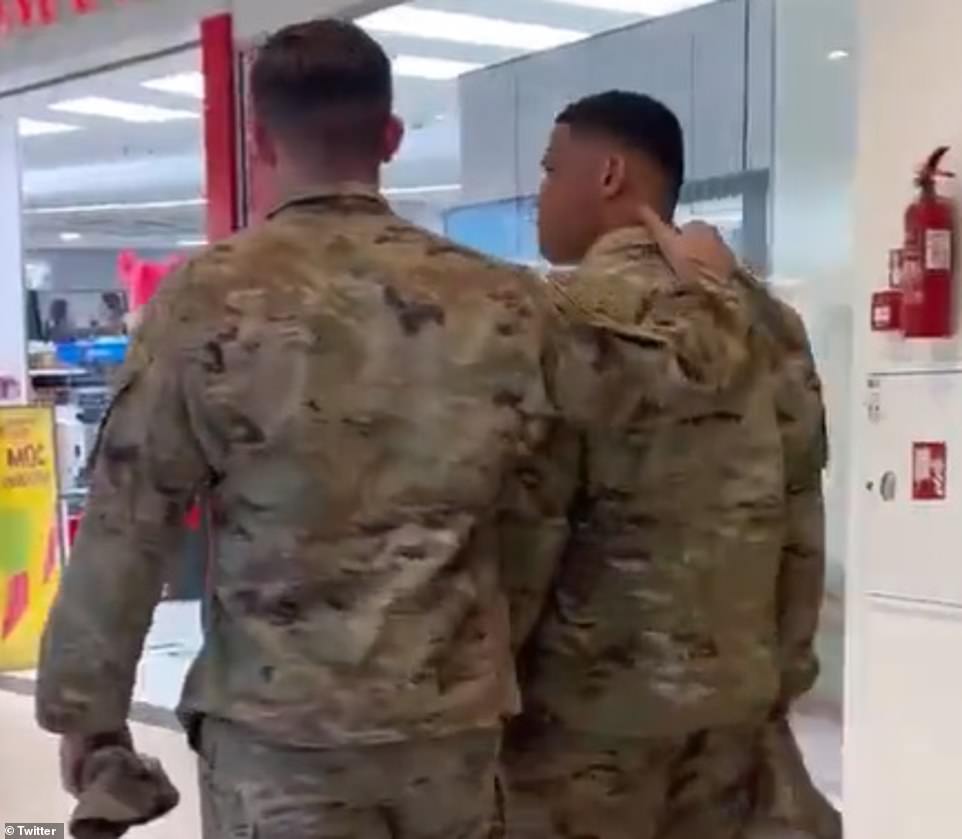 After the man filming said ‘stay away from those white women’ to the black soldier, one of his friends comforted him by patting him on the back and continuing to move him toward the exit

The man filming asks the group about whether they are in Poland to spread ‘George Floyd culture,’ and what they think about the U.S. health secretary being a ‘f***ing t****y.’

He then hurls abuse at the black soldier in the group, warning him to ‘stay away from those white women,’ and that ‘miscegenation used to be a crime in your country.’

The man behind the camera – who bizarrely has an American accent – follows up by saying ‘you’re in a white country now, we don’t worship n*****s and Mexicans.’

The video that has been slammed on social media, quickly sparked outrage – with more than one million people watching.

In the two and half minute video, the man repeatedly attempts to antagonize and bait the U.S soldiers into responding, using targeted language and questioning tactics.

The clip starts with the man approaching the four soldiers and asking ‘you guys Americans?’ to which the men respond ‘yes.’

He then immediately asks the group ‘you guys here to spread sodomy or what? Isn’t that what America’s number one export is?’

The group initially laughed off the abuse – immediately turning their backs on the persistent man filming them. 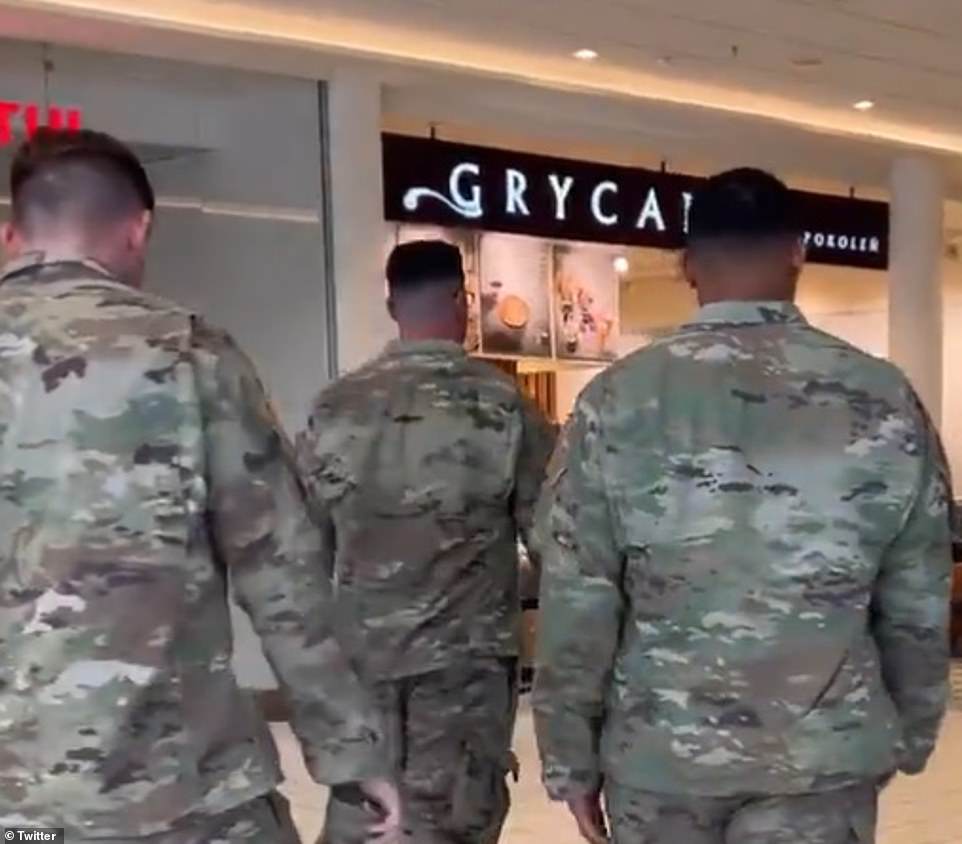 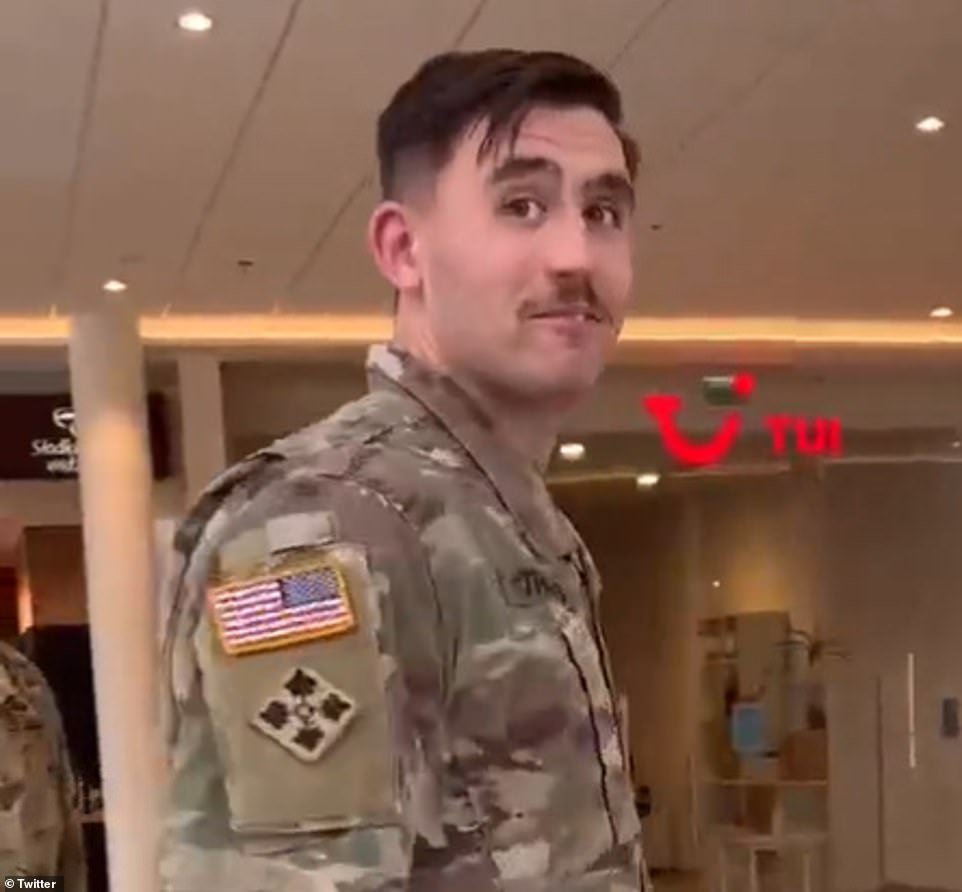 The men all wear U.S. Army brigs with the American flag on them in the video

The person filming, who does not appear in the footage, follows his initial sodomy question and says ‘what is it, is it George Floyd culture or is it sodomy’ referencing the ‘number one export’ he had previously mentioned.

As the soldiers continue to walk away, the man once again attempts to goad them into a response from another angle.

He asks ‘what do you think about your health secretary being a f***ing t****y?’

‘What do you think about defending a country that has no meaning to being a citizen?’ he then asks. ‘Any Mexican crossing the border is literally one of you.’

The men appear to talk amongst themselves, walking in pairs, still ignoring the filming man. 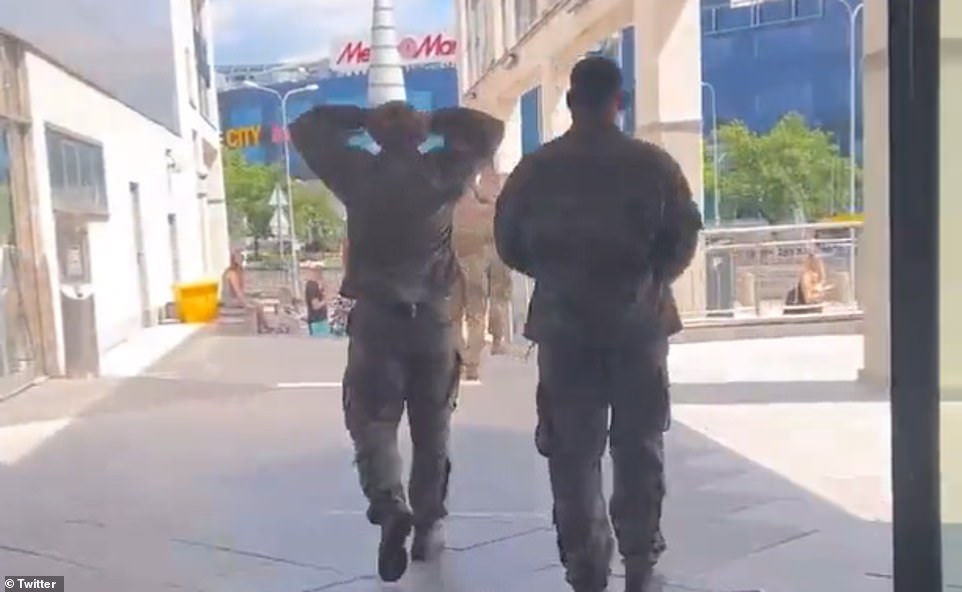 One of the soldiers appeared frustrated after the man said: ‘you’re in a white country now. We don’t worship n*****s and Mexicans’ 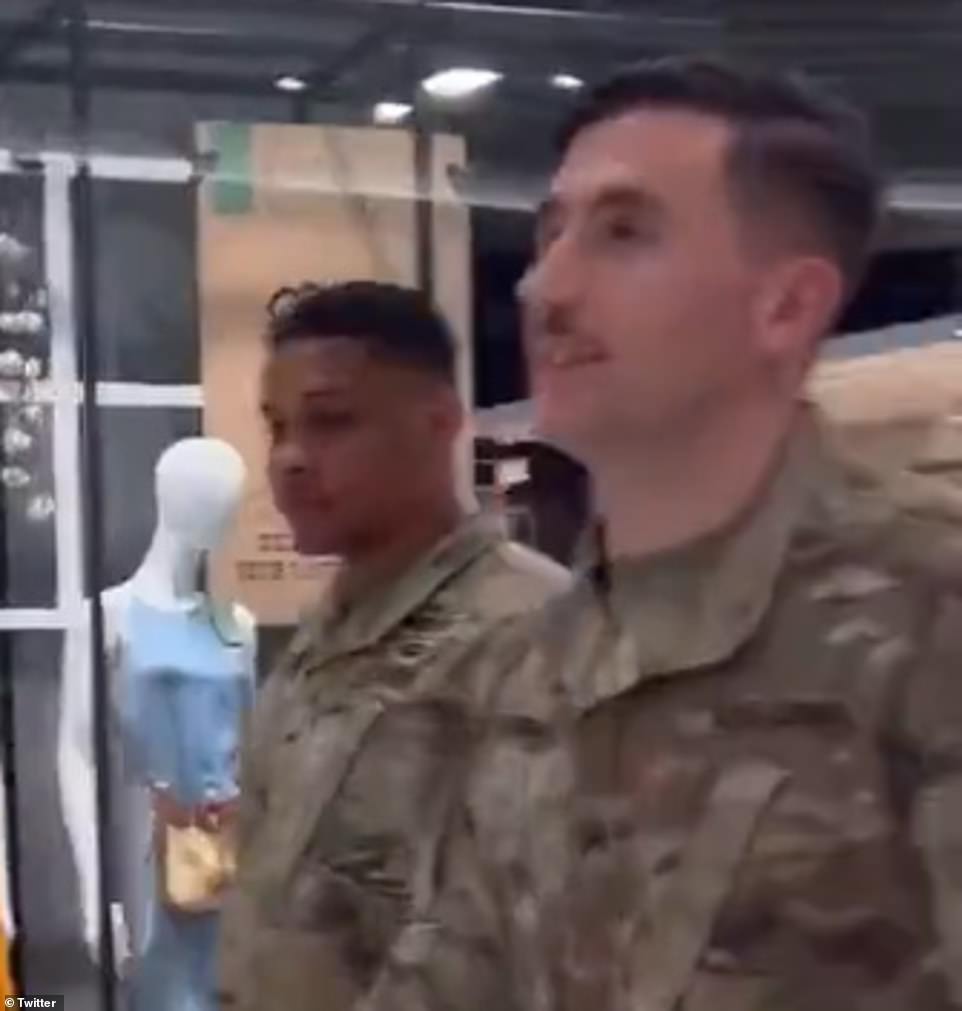 As the group approaches the exit of the building, the man decides to try one more approach by making a racially targeted comment at the lone-black member of the group.

‘Keep Poland white,’ the man is heard saying – getting no response.

The soldier briefly turns around before his friend puts his hand on his back and comforts him, ushering him toward the exit.

The man then continues to try and provoke him and says ‘miscegenation used to be a crime in your country.’

Miscegenation is defined as the the ‘interbreeding of people who are considered to be members of different races.’

In a reply tweet with a second video, the filming man yells at the group: ‘you’re in a white country now, we don’t worship n****** and Mexicans.’

At that point, the man who had been walking with the black soldier began to turn around, looking frustrated at his statements.

The black soldier then comforts him back, patting him and pushing him away.

The video ends with the unidentified cameraman yelling ‘you’re not welcome here, guys,’ as the men leave him behind. 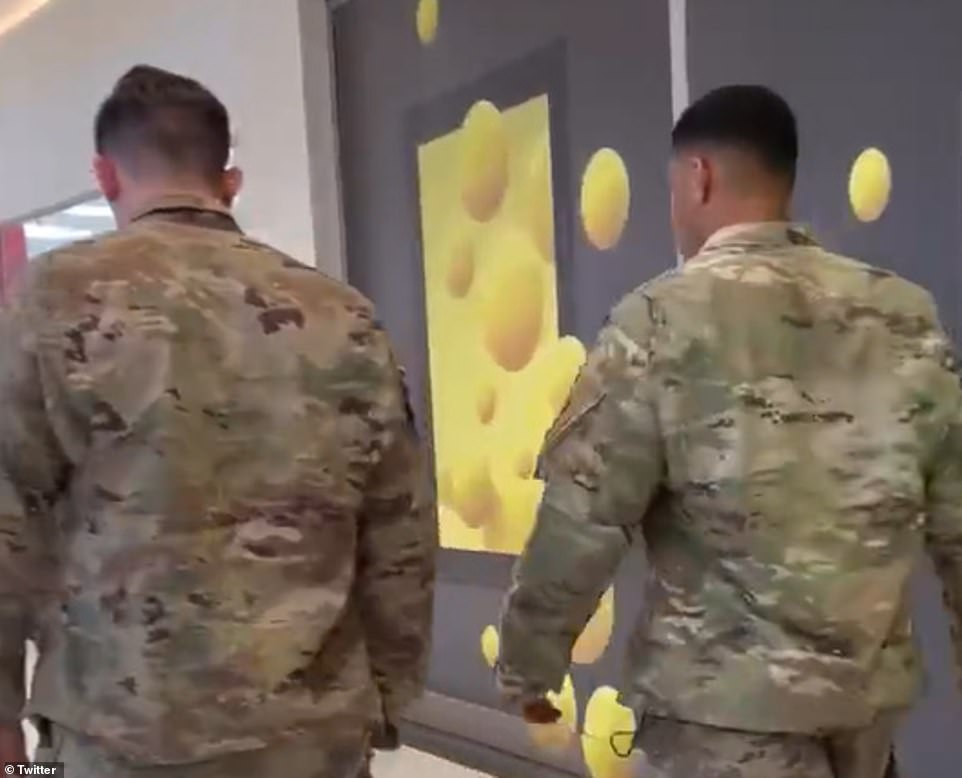 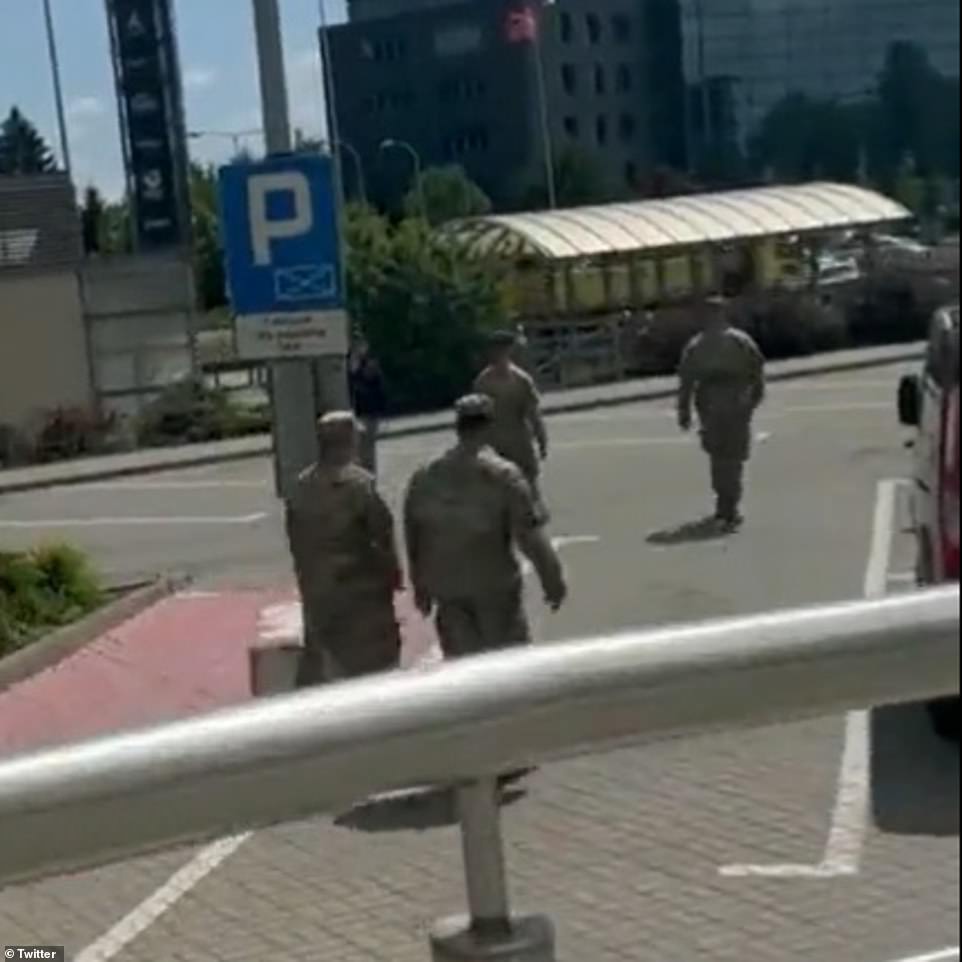 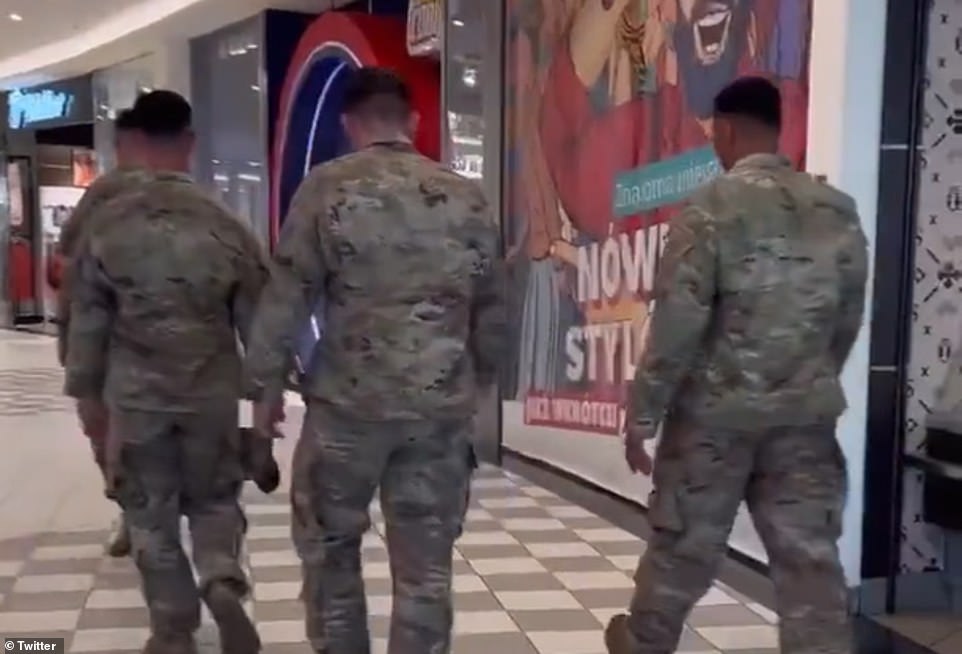 In September, Minadeo posted that he had been arrested after demonstrating in front of the Auschwitz-Birkenau former extermination and concentration camp.

The 39-year-old uploaded a photo on Gab on August 28 of himself with a sign that read ‘Greenblatt suck 6 million d***s’ alongside fellow neo-Nazi Robert Wilson, who held a ‘Shoah the ADL’ sign right outside of the Arbeit Macht Frei gate at Auschwitz.

Newsweek recently spoke with U.S. Army’s director of media relations, Terence Kelley, who said the matter is under investigation at this time.

Kelley said officials are investigating the video’s authenticity, as well.

He said: ‘The U.S. Army expects all Soldiers to abide by the Army Values, on duty and off.

‘We commend all Soldiers who demonstrate discipline and restraint when confronted by provocative behavior.’

The responses, or lack thereof, from the soldiers garnered praise from those who came across the Twitter thread.

‘Thank you for posting this. All too often, those service members who choose the harder right over the easier wrong go unrecognized,’ said verified Twitter user Charlotte Clymer.

‘Proud of our boys for keeping their composure,’ wrote another.

‘This is the military I know and served in. I served 22 yrs with people like this. The restraint…the reassurance…in the midst of hate from what sounds like an American or Canadian. THIS IS WHAT WE DO,’ wrote one person.