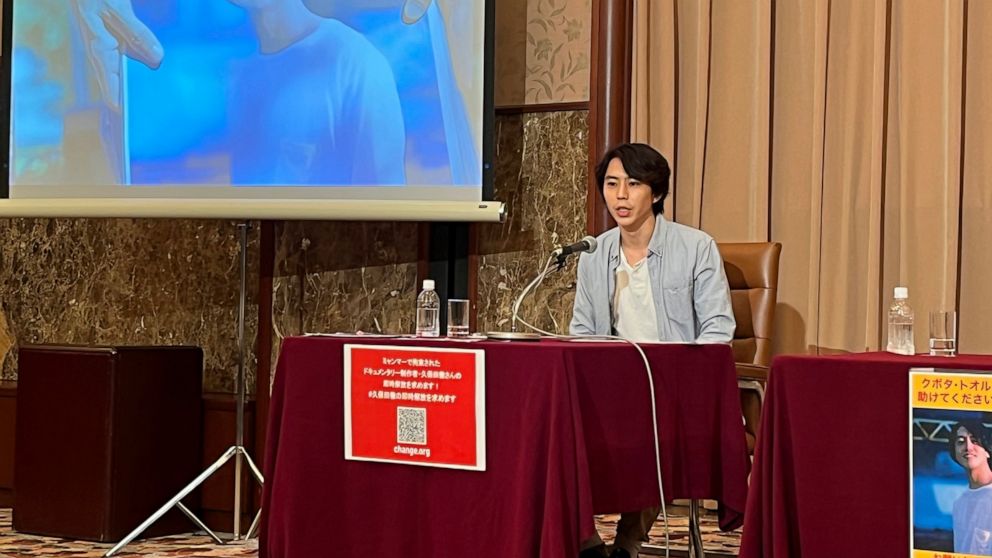 BANGKOK — Myanmar’s military-controlled government announced Thursday it was releasing and deporting an Australian academic, a Japanese filmmaker, an ex-British diplomat and an American as part of a broad prisoner amnesty to mark the country’s National Victory Day.

The imprisonment of the foreign nationals had been a source of friction between Myanmar’s leaders and their home governments, which had been lobbying for their release.

According to the Assistance Association for Political Prisoners, a rights monitoring organization, 16,232 people have been detained on political charges in Myanmar since the army ousted the democratically elected government of Aung San Suu Kyi in February last year.

Of those arrested, 13,015 were still in detention as of Wednesday, the AAPP reported. Additionally, at least 2,465 civilians have been killed by security forces in the same period, the group says, though the number is thought to be far higher.

Amnesty International Australia’s Tim O’Connor welcomed the decision to release Turnell, saying like many others, he should never have been arrested or jailed.

“Amnesty continues to call for the release of all those arbitrarily detained for peacefully exercising their human rights,” he said. “Thousands of people jailed since the coup in Myanmar have done nothing wrong.”

Japan’s top government spokesperson, Hirokazu Matsuno, told reporters Kubota was due to leave Myanmar on a flight Thursday night and could be in Japan as soon as Friday. He said officials believe the 26-year-old Tokyo-based documentary filmmaker is in good health.

Britain’s embassy in Yangon said Bowman had not yet been released from prison. Australian Foreign Minister Penny Wong tweeted that she welcomed reports of Turnell being released, but would not comment further for the time being, and the U.S. Embassy in Yangon referred queries to Washington.

Turnell, 58, an associate professor in economics at Sydney’s Macquarie University who had been serving as an advisor to Suu Kyi, was arrested by security forces at a hotel in Yangon just days after last year’s military takeover. He was sentenced in September to three years in prison for violating the country’s official secrets law and immigration law. Suu Kyi and three of her former Cabinet members were convicted in the same trial, which was held in a closed court, with their lawyers barred by a gag order from taking about the proceedings.

Fellow Australian economist Tim Harcourt said in an email he was delighted to hear of his longtime friend Sean Turnell’s release.

He thanked the Australian government, activists and Turnell’s friends and colleagues who had lobbied for his release and said he was looking forward to him returning home to Sydney.

“It’s a great relief to his wonderful wife Ha, his sister and father and all the family,” Harcourt said.

“Sean’s heart was with the people of Myanmar to help lift them about of poverty and help Myanmar reach its economic potential. He should never have been imprisoned for doing his professional duty as an economist involved in development economics,” he said.

Myanmar has been in turmoil since the takeover, which led to nationwide protests that the military government quashed with deadly force, triggering armed resistance that some U.N. experts now characterize as civil war.

Kubota was arrested July 30 by plainclothes police in Yangon after taking images and videos of a small flash protest against the military. He was convicted last month by the prison court of incitement for participating in the protest and other charges and sentenced to 10 years in prison.

Since seizing power, the military has cracked down on the coverage of protests, raided media companies, detained dozens of journalists and revoked the licenses of at least a dozen outlets.

Most of those detained are being held on the incitement charge for allegedly causing fear, spreading false news, or agitating against a government employee.

Some of the closed media outlets have continued operating without a license and many Myanmar journalists are working underground, moving from one safe house to another, hiding in remote border regions, or basing themselves in exile.

Kubota was the fifth foreign journalist detained in Myanmar after the military seized power. U.S. citizens Nathan Maung and Danny Fenster, who worked for local publications, and freelancers Robert Bociaga of Poland and Yuki Kitazumi of Japan were eventually deported before having to serve full prison sentences.

Bowman, 56, a former British ambassador to Myanmar who had been running a business consultancy, was arrested with her husband, a Myanmar national, in Yangon in August. She was given a one-year prison term in September by the prison count for failing to register her residence.

Kyaw Htay Oo, a naturalized American, returned to Myanmar, the country of his birth, in 2017, according to media reports. He was arrested in September 2021 on terrorism charges and has been in custody ever since.

Myanmar did not release many details of the other prisoners who were being freed, but almost all would have been being held on charges related to the protests, including Section 505(A) of Myanmar’s penal code, which makes it a crime to spread comments that create public unrest or fear or spread false news, and carries a penalty of up to three years in prison.

Those being released included Kyaw Tint Swe, a former union minister for the office of the State Counsellor, Than Htay, a former member of the Union Election Commission and Lae Lae Maw, a former Chief Minister of Tanintharyi Region who had been jailed for 30 years for corruption since 2020 under Suu Kyi’s government, MRTV announced.

Among the first set free from Yangon’s Insein prison were prominent author Maung Thar Cho, pro-democracy activist Mya Aye, and Myo Nyunt, the spokesperson of Suu Kyi’s NLD party, all of whom were arrested in the early morning hours of Feb. 1, 2021, the day the military seized power.

“I will always stand together with the people of Myanmar,” Mya Aye defiantly told the crowd outside the prison after he was released.

Grant Peck in Bangkok, Mari Yamaguchi in Tokyo and Rod McGuirk in Canberra, Australia, contributed to this story.