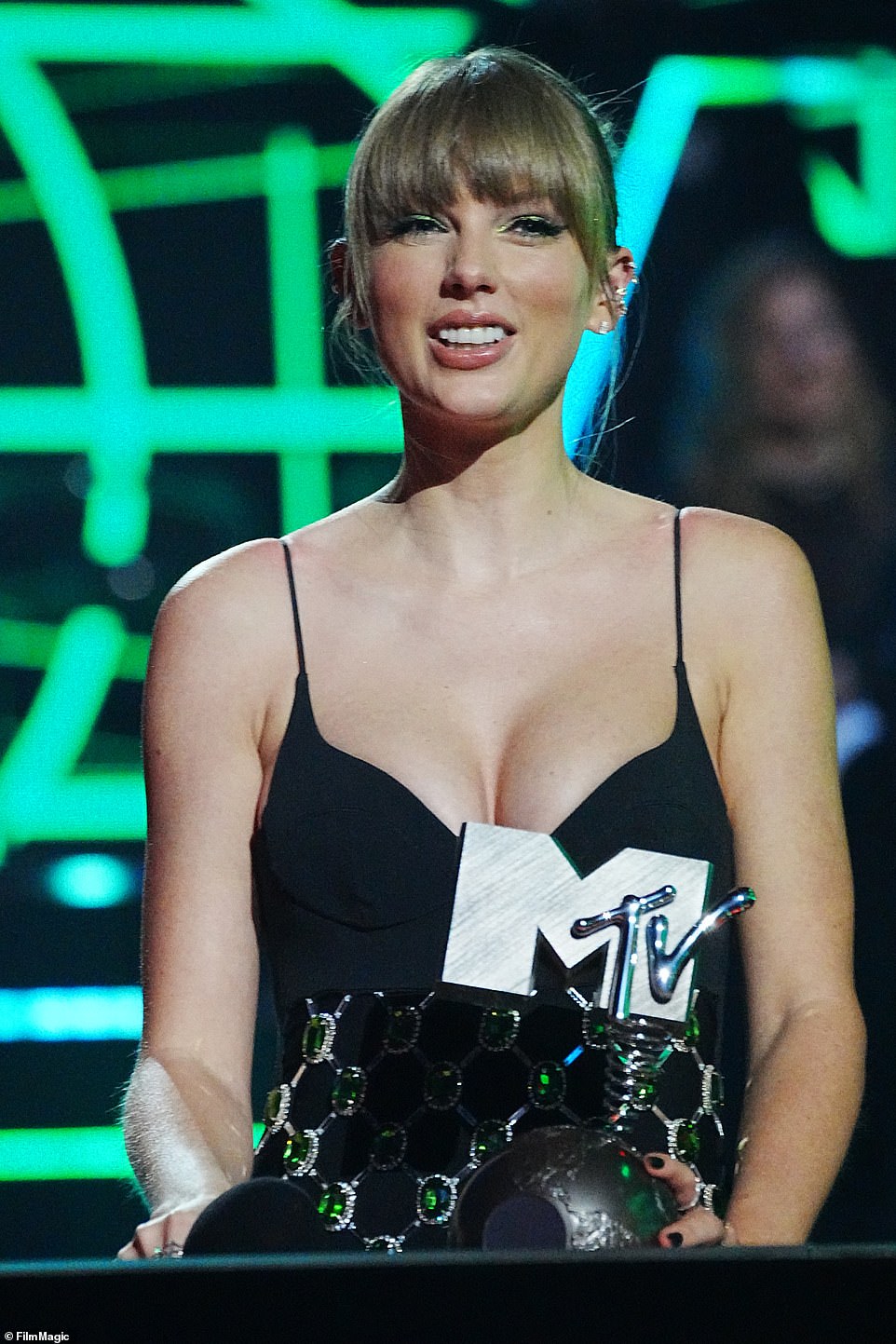 Taylor Swift led the way as she won four gongs at the MTV EMAs at Düsseldorf’s PSD Bank Dome in Germany on Sunday.

The singer, 32, took home the Best Video and Best Longform Video award for her 10-minute version of All Too Well (Taylor’s Version), beating top global stars including Foo Fighters and Stormzy.

Winning big: Taylor Swift, 32, led the way as she won four gongs at the MTV EMAs at Düsseldorf’s PSD Bank Dome in Germany on Sunday

Elsewhere, Taylor was named the winner of the Best Artist category, the Best Pop prize, while she was also nominated in the Biggest Fans section, which was won by BTS.

Accepting the first award from John Lennon’s son and singer Julian, who presented the prize, she said: ‘It’s so good to be back at the EMAs. You all look very beautiful tonight.’

The singer-songwriter continued: ‘I have been writing and directing my music video for a long time but this was the first short film I have made and I felt like I learned so much about myself of how making film can be a natural extension of my storytelling just like songwriting.’ 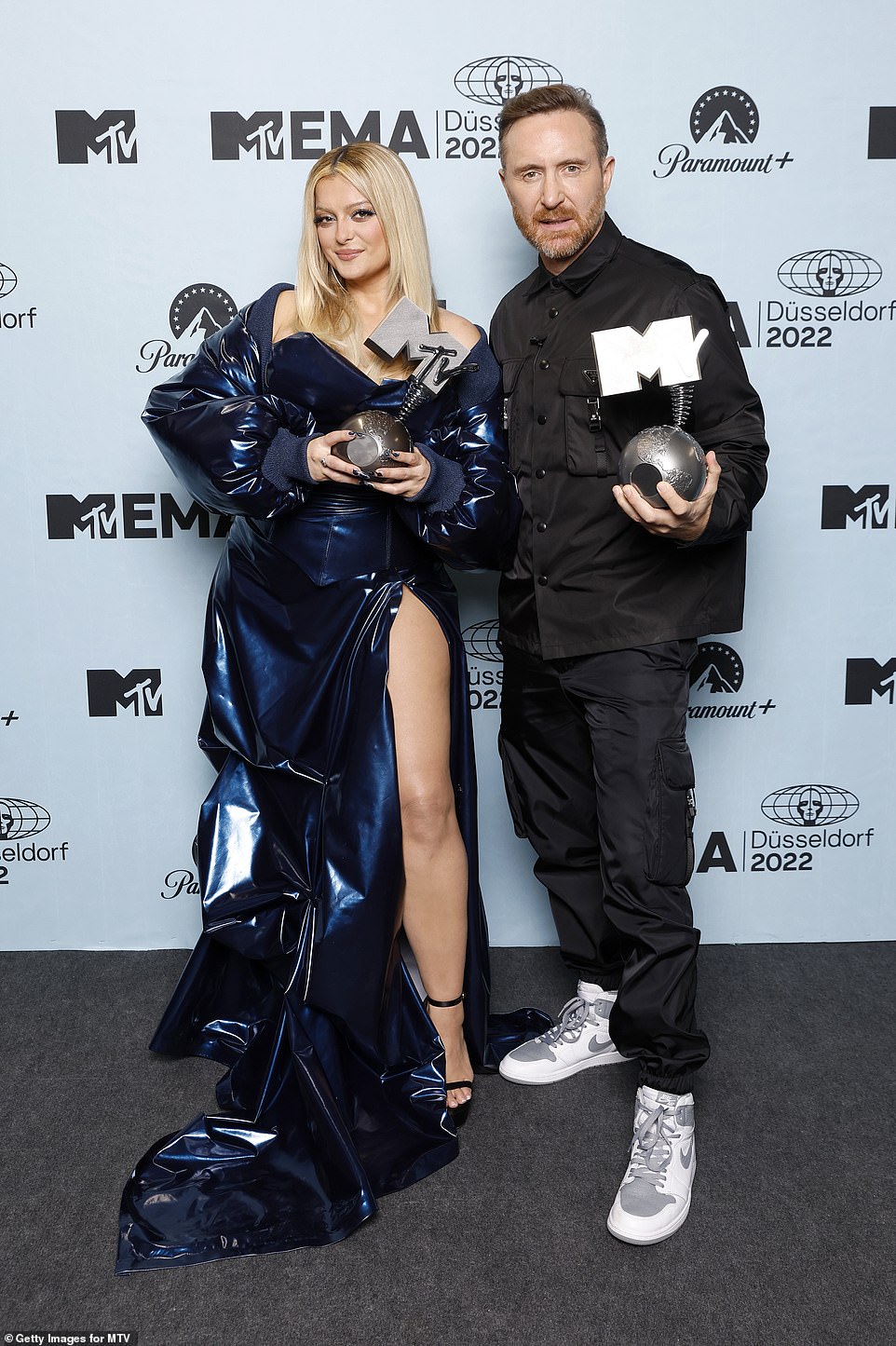 Hitmakers: DJ David Guetta and singer Bebe Rexha came out on top in the Best Collaboration for their hit I’m Good (Blue) 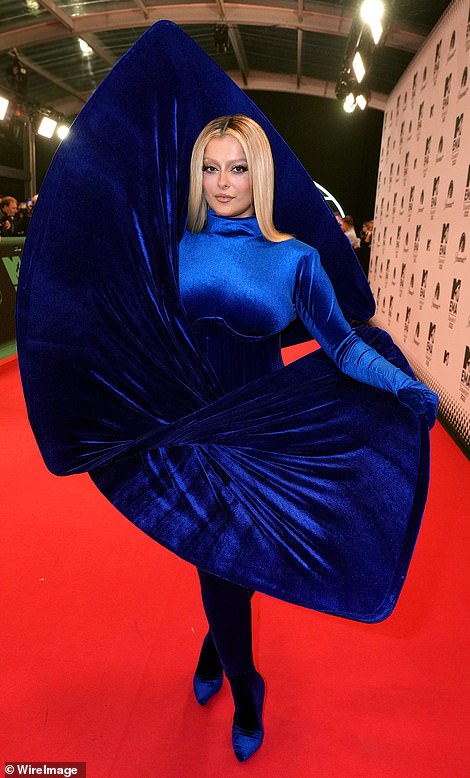 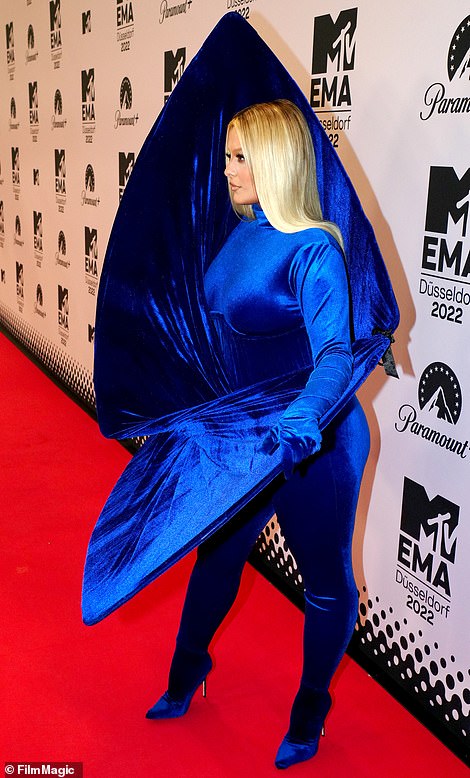 Unique sense of style: Bebe ensured she caught the eye as she wore an abstract royal blue dress while walking the red carpet on arrival 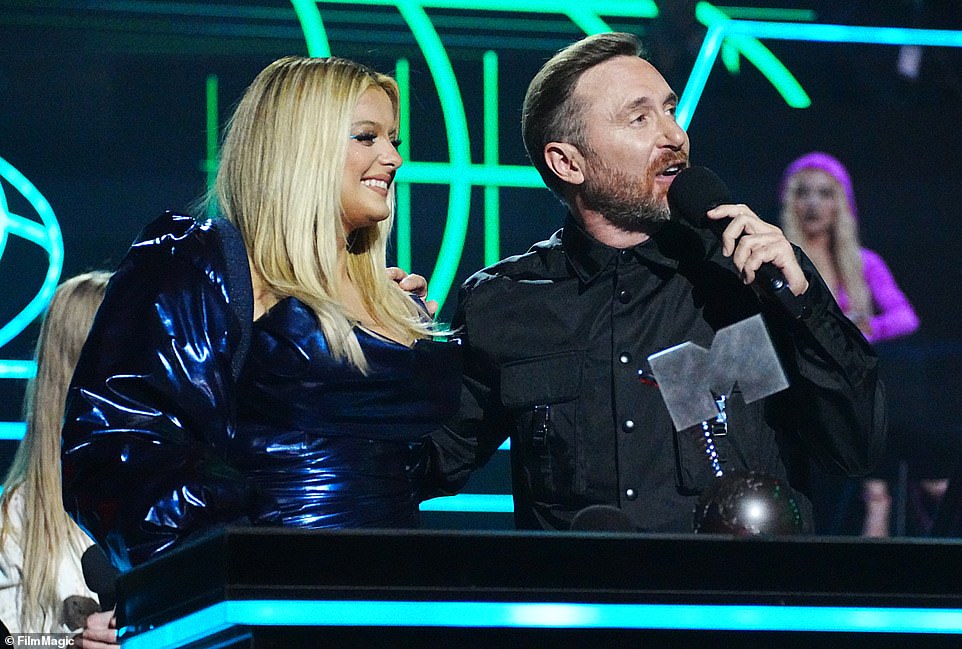 All smiles: Bebe Rexha and David were in good spirits as they took to the stage to collect their award, smiling as they thanked the audience and fans for their support 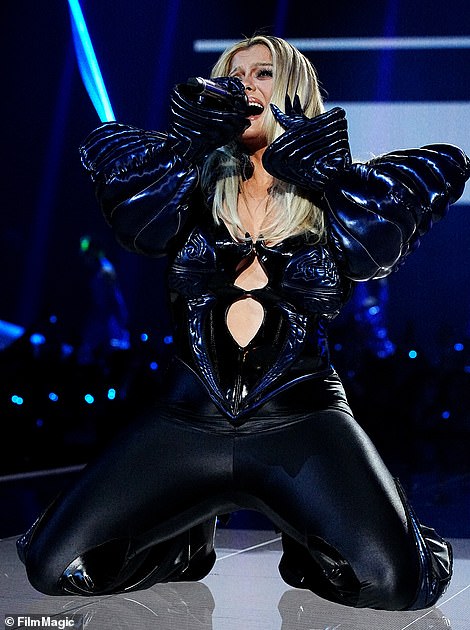 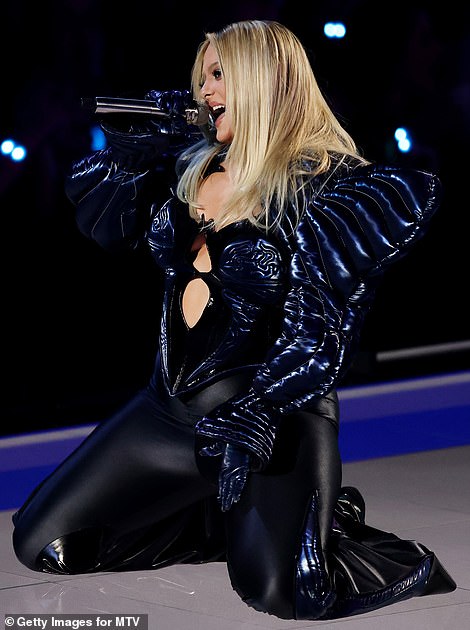 Music to her ears: Bebe looked incredible in a black shaped catsuit with cut-out detail as she performed during the ceremony

Taylor also thanked actors Dylan O’Brien and Sadie Sink who starred in the music video and praised her fans for their continued support, adding: ‘You’re the reason that anything has every happened to me.’

The track went viral earlier this year after fans speculated the song is based on Taylor’s break-up with actor Jake Gyllenhaal.

It also picked up the prestigious video of the year gong at the MTV Video Music Awards earlier this year.

British band Muse next picked up the Best Rock Prize after delivering an electric performance to their new track Will Of The People at the start of the ceremony. 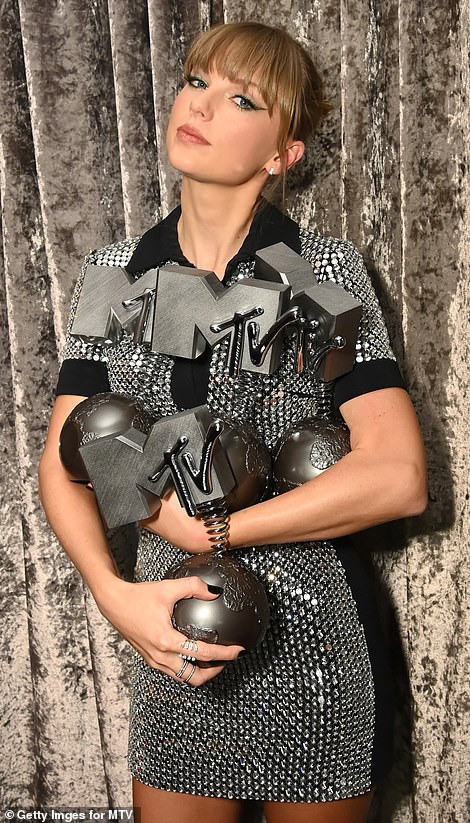 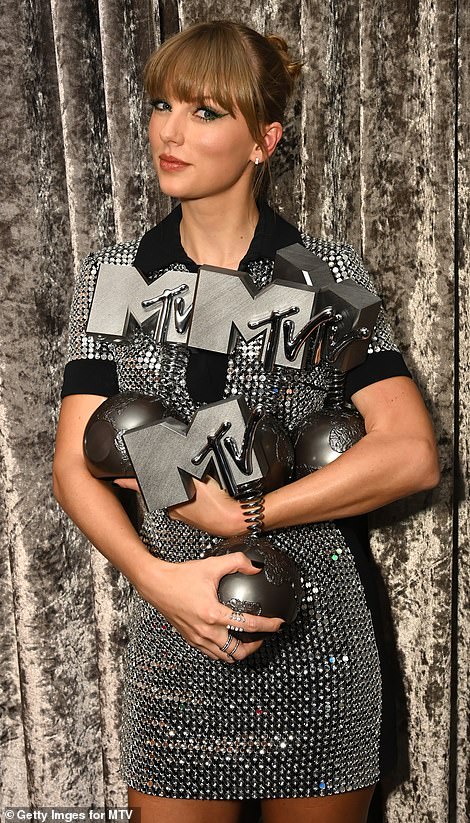 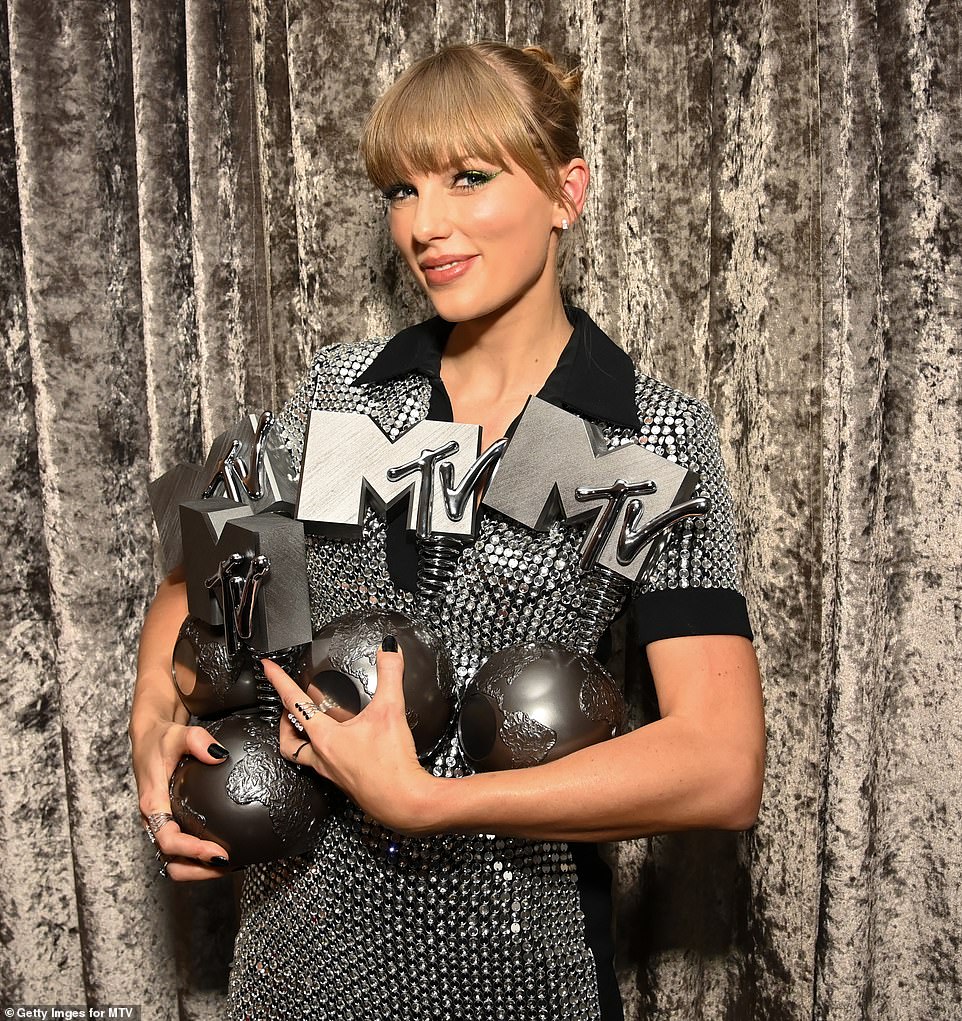 Success story: Elsewhere, Taylor was named the winner of the Best Artist category, the Best Pop prize, while she was also nominated in the Biggest Fans section, which was won by BTS 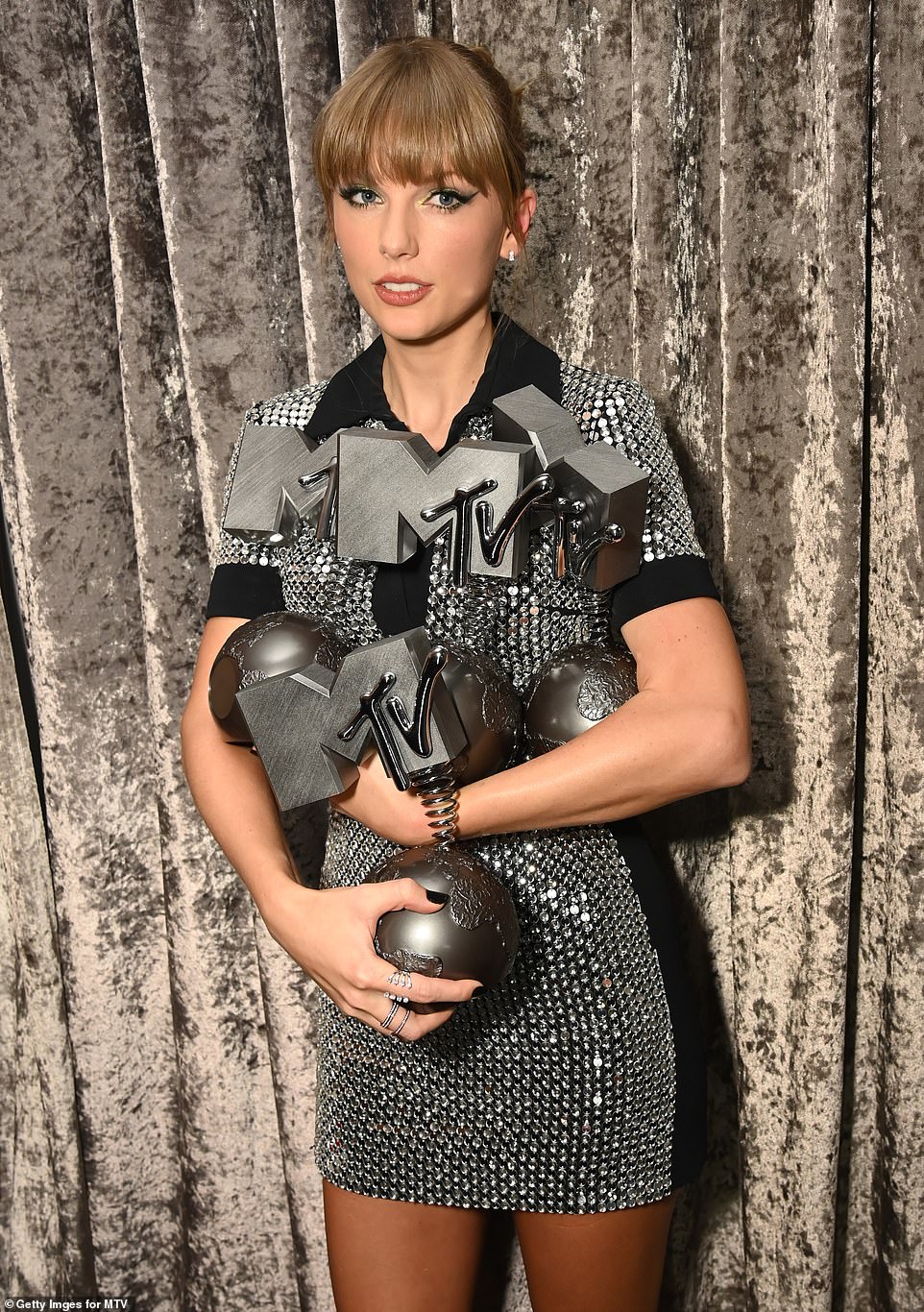 Decorated: Taylor was seen holding her awards in her arms as she posed backstage after collecting her prizes during the ceremony

This year’s ceremony is being hosted by celebrity power couple singer-songwriter Rita Ora and Oscar-winning filmmaker Taika Waititi and marks the sixth time the awards show has been held in Germany.

It is the couple’s first time working together after keeping their partnership mostly out of the spotlight since they first sparked relationship rumours last year after appearing alongside each other on red carpets.

Meanwhile, Nicki Minaj was winner of the Best Song prize for her track Super Freaky Girl, while DJ David Guetta and singer Bebe Rexha came out on top in the Best Collaboration for their hit I’m Good (Blue).

Nicki was also named the winner of the Best Hip Hop category. 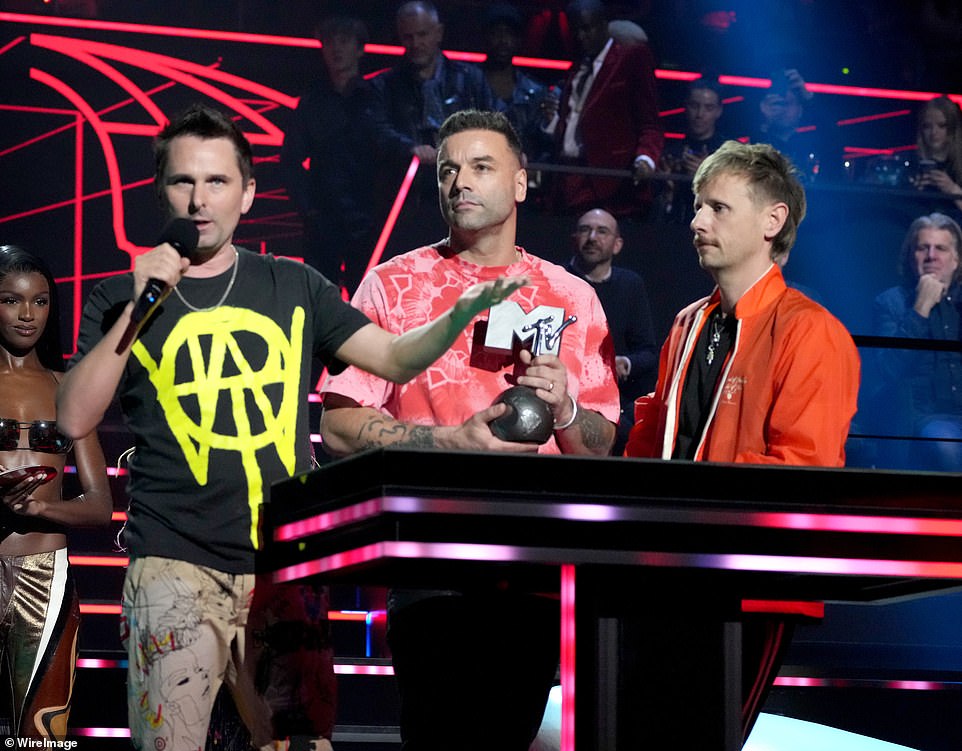 Award winners: British band Muse picked up the Best Rock Prize after delivering an electric performance to their new track Will Of The People at the start of the ceremony 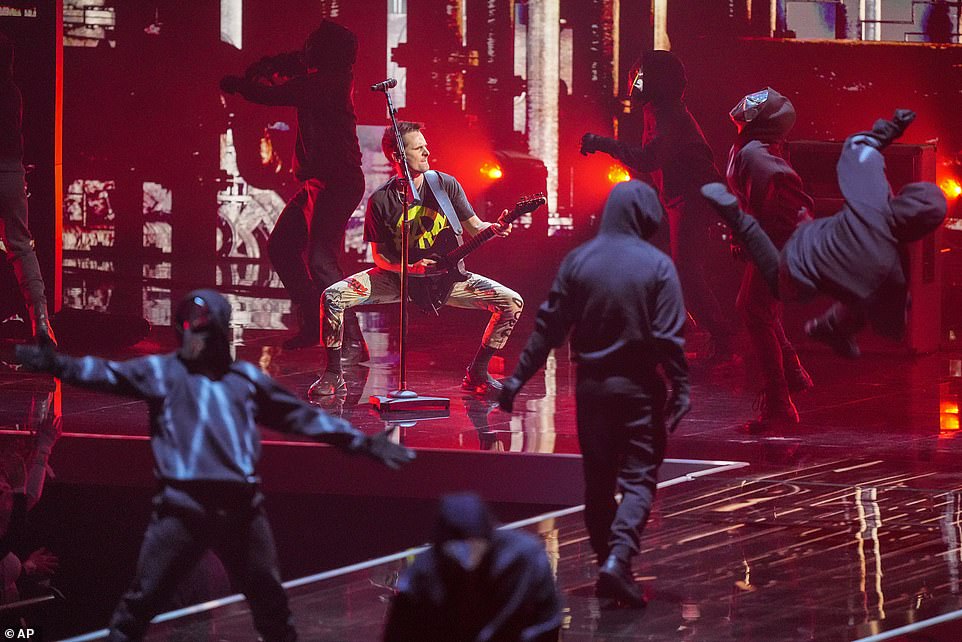 Born to perform: Matt Bellamy from the band Muse was seen on stage at the glitzy ceremony in Germany

The winner of the Best New award was boyband Seventeen, while Lisa took home the Best K-Pop gong.

Anitta was named the winner of the Best Latin award David Guetta triumphed in the Best Electronic category.

Band Muse triumphed in the Best Rock category, while the Gorillaz won the Best Alternative prize.

Sam Smith and Kim Petras won in the Video For Good category for the promo for their song Unholy,

Rita Ora made her return as MTV EMAs host this year alongside her husband Taika Waititi, five years after she made her hosting debut in 2017. 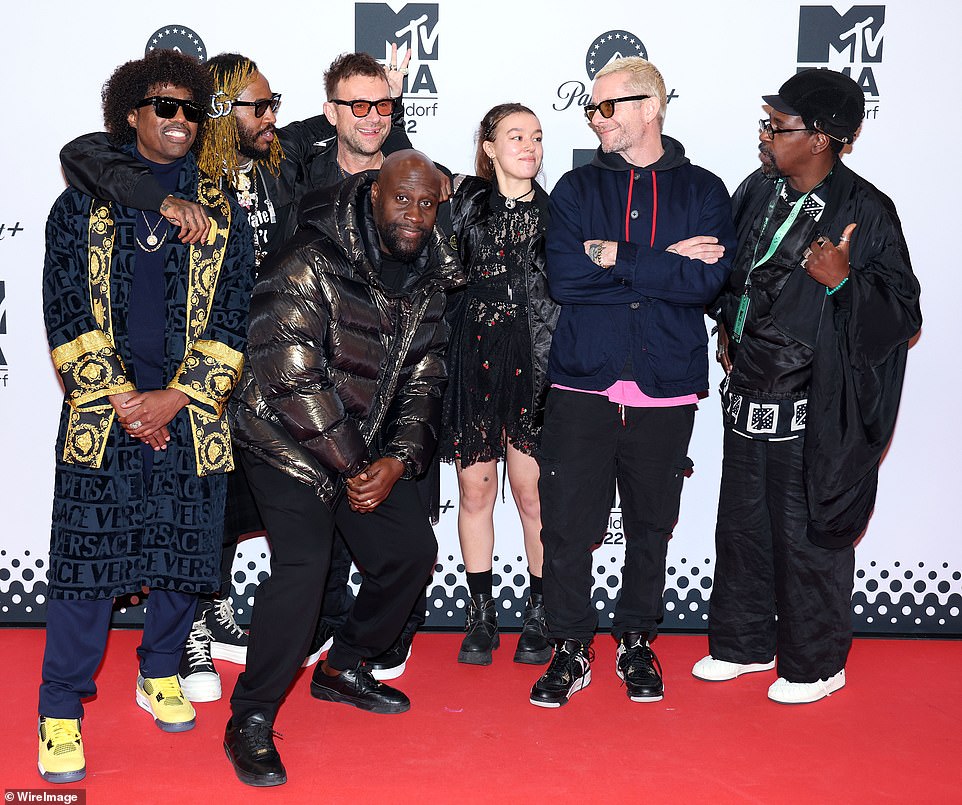 Champions: Gorillaz won the Alternative award, with the band – Thundercat, Bootie Brown and Damon Albarn – posing with Damon’s daugher Missy and rapper Posdnous of De La Soul, who who they performed, ahead of the ceremony

Rita, who had herself been nominated on several occasions and won the Power of Music Award, took to the stage at the beginning of the show to perform R.I.P.

It marked the third time she had taken to the stage to perform at the coveted event, as she joined the likes of Bebe Rexha, Gorillaz and David Guetta in singing at this year’s ceremony.

Other acts joining a night of incredible performances included Ava Max and Muse, as well as Scottish sensation Lewis Capaldi, who made his EMAs debut.

The entertainment came at intervals as the stars of the music world received awards throughout the glitzy event.

Fans had been voting for their favourite artists across 19 gender-neutral categories. 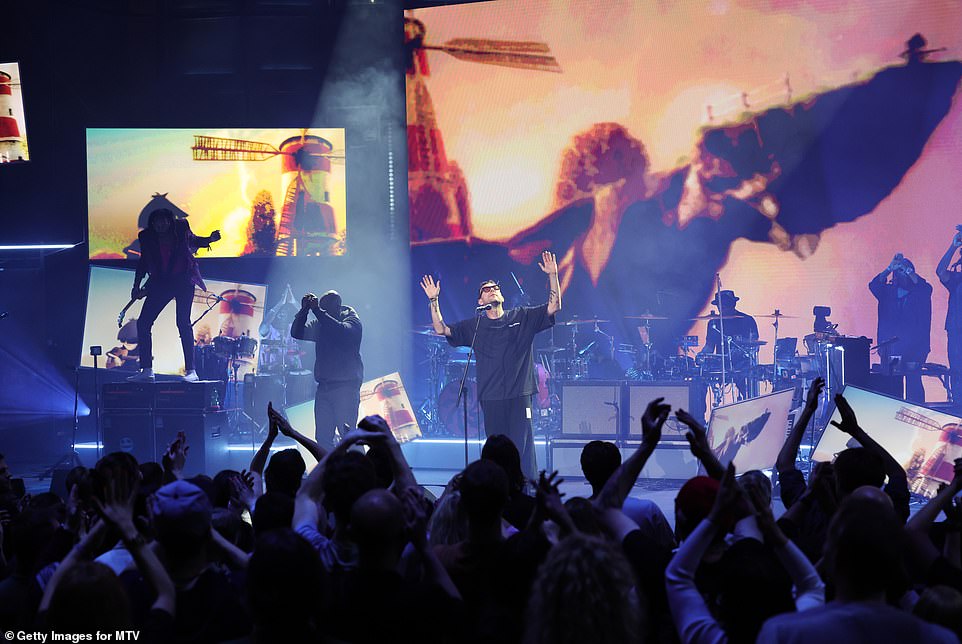 Making music: Damon was seen whipping the crowd into a frenzy as he performed with Gorillaz at the event

Following him was fellow pop icon Taylor Swift, who also stood out from the crowd with six nominations this year.

The two chart toppers also scored nominations for Best Local Act in their respective home regions: the UK and Ireland, and the US. 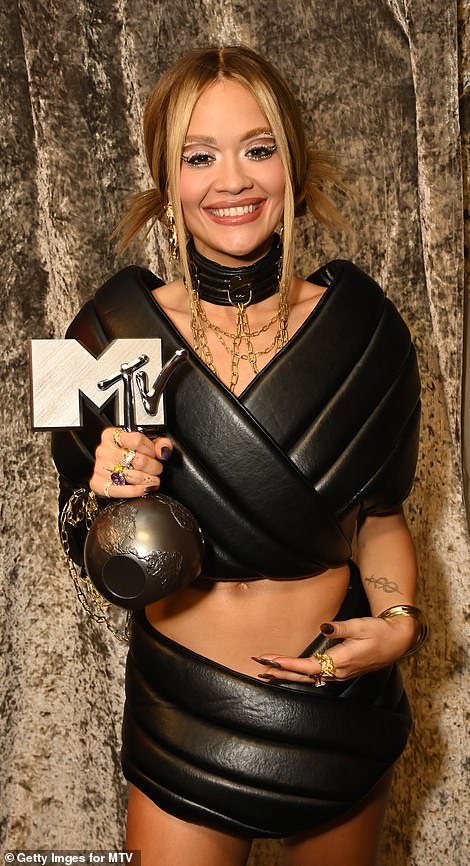 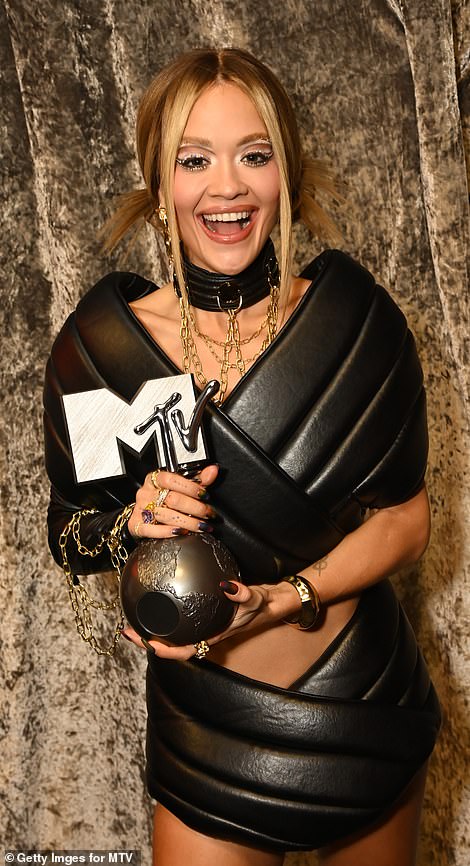 Prize winner: Rita Ora, who hosted the event, won the award for Best Look Personal Style, with the star giving a glimpse at her midriff backstage in a unique black dress while holding her gong 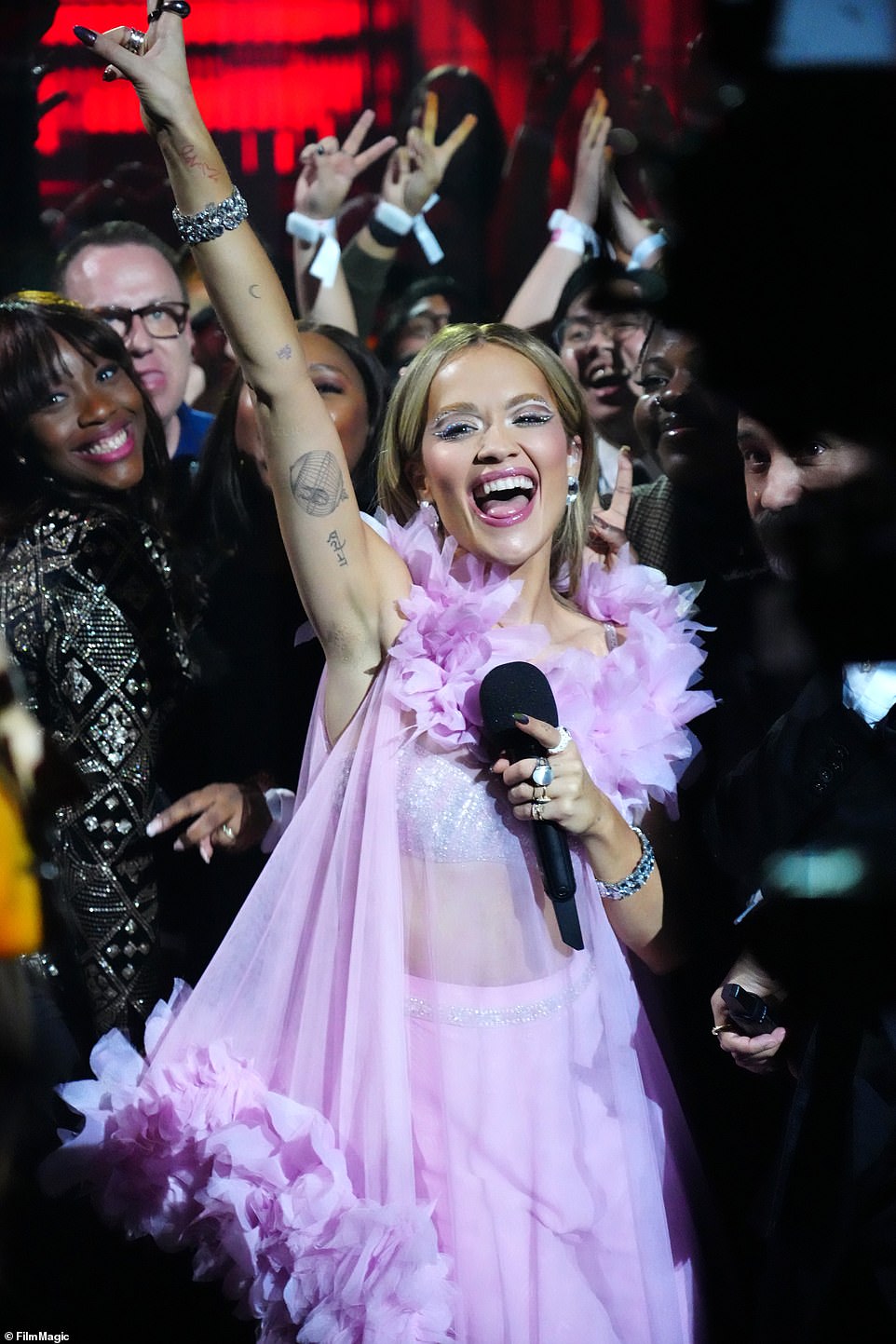 Standing out from the crowd: Rita wore a sheer lilac dress with ruffled detail as she hosted the MTV VMAs this year 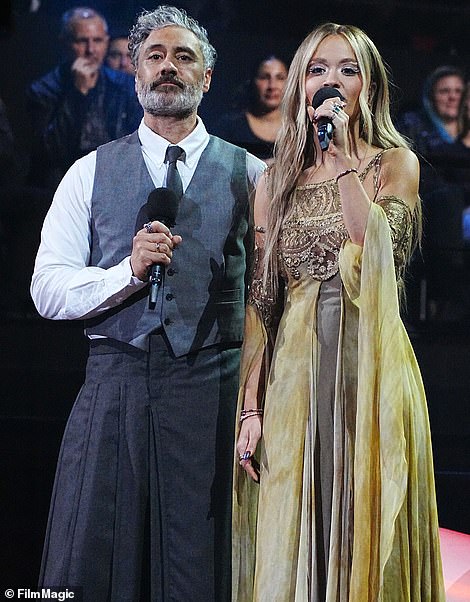 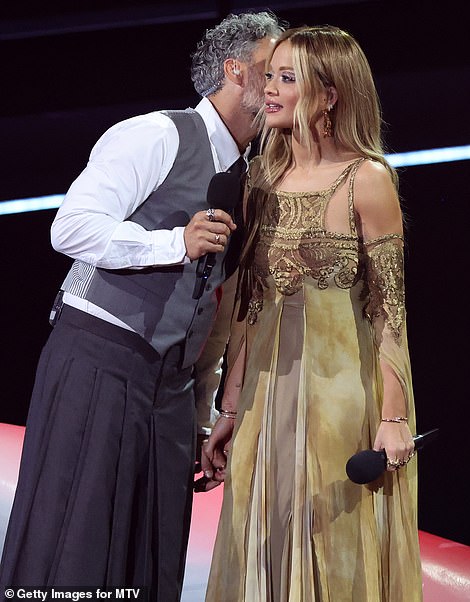 Happy couple: Rita looked glamorous in a gold dress as she hosted the show alongside her film director fiancé Taika Waititi in Germany

The ceremony will broadcast live on MTV in more than 170 countries on 13 November and will be available on Paramount+ and Pluto TV globally beginning 14 November. This year marks the sixth time Germany has hosted the event.

Panic! At The Disco