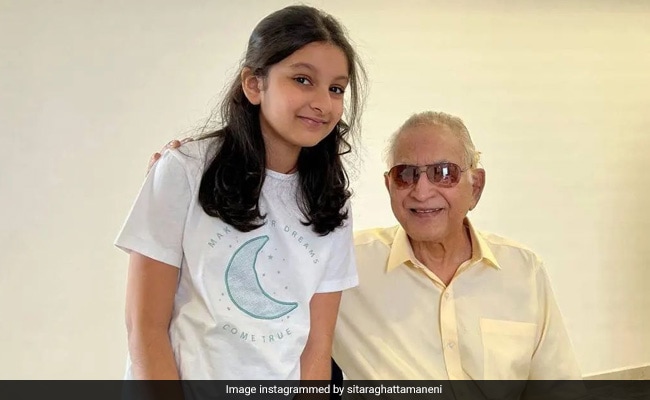 Veteran actor and superstar Mahesh Babu’s father Krishna died at the age of 79 in Hyderabad on Tuesday. The legendary actor was remembered by his granddaughter Sitara in a social media post. Sitara, daughter of Mahesh Babu and Namrata Shirodkar, posted a throwback picture with her grandfather and she wrote: “Weekday lunch will never be the same again…You taught me so many valuable things… Always made me smile. Now all that’s left is my memory of you. You’re my hero… I hope I can make you proud someday. I’ll miss you so much Thatha garu…”

On Tuesday evening, Krishna’s daughter Manjula Ghattamaneni shared a post for her late father. “You are a superstar to the world and for us, at home, you are a loving, simple father who is always there for us, no matter what. Even in your hectic schedules, you made it a point to be there for us, giving us all that we need,” read an excerpt from her post.

Krishna, best known by his stage name, starred in over 350 movies during his extensive film career. He stepped into Telugu cinema with Adurthi Subba Rao’s romantic drama Thene Manasulu in 1965. Other than being an actor, Krishna was also a film producer and director. In 2009, he received the Padma Bhushan.