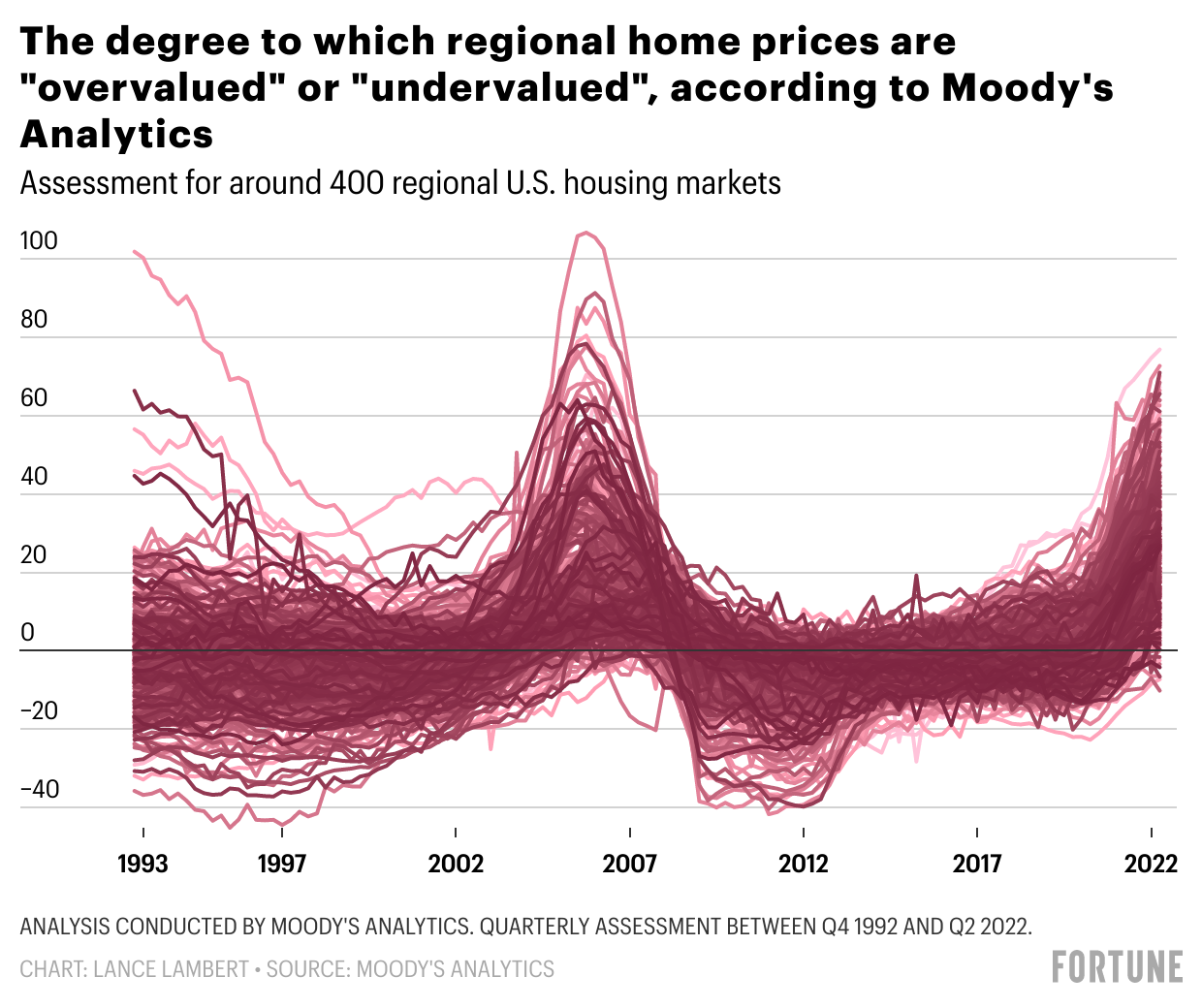 It didn’t take long for white-collar professionals in 2020 to realize that expanded work-from-home policies meant they could buy real estate pretty much anywhere. Vacation markets went gangbusters. Exurbs got red-hot, as did so-called “Zoom towns” like Boise. Even big cities that were losing residents, like New York and San Francisco, got overheated as decoupling roommates created a spillover effect from the rental market into the housing market

That Pandemic Housing Boom coincided with a staggering 42% jump in U.S. home prices between March 2020 and June 2022. At least 60% of that appreciation, researchers at the Federal Reserve bank of San Francisco estimate, can be attributed to the elevated demand for “space” that occurred during the pandemic.

This swift pullback in demand also has more economists uttering the most feared word in housing: Bubble.

“It was a pandemic-induced [housing] bubble, which was stoked by work-from-home migration trends: High wage workers going to lower second tier middle markets for more space,” said Diane Swonk, chief economist at KPMG. “We went to an extreme on WFH [spurred housing demand], but it has pretty much abruptly ended. It is part of the reason I think you’re seeing housing prices fall as well. The local incomes don’t support a lot of these home values.”

We’ve already seen home price growth rollover on a national basis. Between June and August, the Case-Shiller National Home Index showed a 1.3% drop in U.S. home prices. That marks the first decline since 2012.

“Once you start the process of prices falling nationally, there is a self-fulfilling momentum to it because no one wants to catch a falling knife,” Swonk says. “We’re easily going to see large double-digits declines. I think 15% next year is very conservative. We’re already turning.”

Here are the four big takeaways from Fortune‘s chat with Swonk.

Whenever the Federal Reserve flips into rate hiking mode, it’s going to spell trouble for rate sensitive sectors like the U.S. housing market. When those rate hikes turn aggressive because the central bank fell behind on its inflation-fight, it’ll be that much more intense.

Of course, that’s exactly what we’ve seen in 2022. The Fed’s monetary tightening has seen the average 30-year fixed mortgage rate spike over the past year from 2.98% to 7.1%. That marks the biggest mortgage rate shock since Fed Chair Paul Volcker’s infamous tightening in 1981.

That mortgage rate shock matters for two reasons. First, historically low mortgage rates—which also helped to power the Pandemic Housing Boom—are gone. Second, the spike means many would-be buyers have either been priced out or lost their mortgage altogether.

Home prices are falling—but it isn’t the 2008 story

If U.S. home prices actually fall 15%, it’d mark the second biggest home price correction of the post-World War II era. Only the 27% correction between 2006 and 2012 would have it beat.

That said, the Federal Reserve says this isn’t a repeat of the 2008 crisis.

“From a financial stability standpoint, we didn’t see in this cycle the kinds of poor underwriting credit that we saw before the Great Financial Crisis. Housing credit was much more carefully managed by the lenders. It’s a very different situation [in 2022], it doesn’t present potential, [well] it doesn’t appear to present financial stability issues. But we do understand that [housing] is where a very big effect of our policies is,” Fed Chair Jerome Powell told reporters earlier this month.

Swonk agrees with Powell: “This is not a subprime crisis, they’re [the fed] right about that.”

However, while improved lending standards and tight supply should prevent a 2008 repeat, they aren’t enough to prevent a housing correction. At least that’s how Swonk sees it.

“The interesting thing to me is how quickly some of these markets are correcting with still very tight inventories,” Swonk says.

Phoenix is very bubbly—Chicago not so much

The Pandemic Housing Boom saw “investor mania” return to the market. Historically low mortgage rates attracted mom-and-pop landlords and Airbnb hosts alike. Short-term flippers, attracted by record levels of home price appreciation, got in too. Indeed, a total of 114,706 homes were “flipped” in the first quarter of 2022, according to ATTOM Data. That’s higher than any quarter in the years leading up to the 2008 bubble. Speculation? Check.

While the first two elements of the housing bubble did indeed return during the pandemic, the third element has yet to hit. Swonk says that “burst” is starting, but it’ll vary by market.

The reason Swonk thinks the bust will vary? Some markets got a lot more bubbly than others.

Heading forward, housing economists expect markets like Phoenix to be at higher risk for sharper home price declines. In fact, Moody’s Analytics is currently forecasting a 18.7% peak-to-trough drop in bubbly Phoenix. In Chicago, the analytics firm expects home prices to fall just 3.6%. (You can find Moody’s forecast for 322 markets here).

Fed Chair Jerome Powell has made it clear that the U.S. housing market is in a “difficult correction.” Once it’s completed, buyers and sellers alike will return to a “reset” market.

Reading between the lines, some economists take “reset” as meaning “home prices will fall.”

“Let’s face it, where is one of the biggest pushes on inflation right now? It’s in shelter costs. And it’s where they [the Fed] have the most power,” Swonk says. “And so, yeah, it was a stunning rise in [home] prices. An unsustainable rise—some kind of correction is needed. The problem is you don’t get to choose how big that correction is.”

A mild correction in home prices, Swonk says, would help the Fed to both rein in shelter costs and overall inflation. In that scenario, buyers might return to a market with both lower prices, more inventory, and lower mortgage rates.