The US Soccer Federation is using a rainbow version of its crest at the Americans’ World Cup training facility in Doha, Qatar.

The federation, which normally uses a crest with blue lettering and red stripes, changed the stripes to seven different colours at Al Gharrafa training facility, where workouts have started ahead of the Americans’ World Cup opener against Wales.

The rainbow crest is part of the Be the Change initiative of the USSF and its players, which also called for tougher US gun laws. 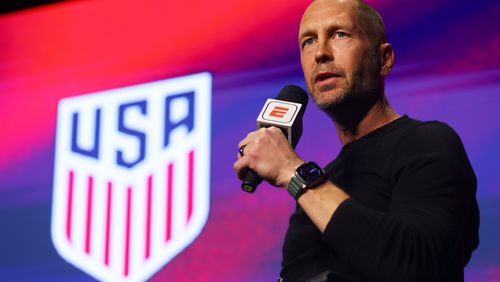 Qatar has been criticised over attitudes towards LGBTQ fans and the treatment of migrant workers.

“When we are on the world stage and we are in a venue like Qatar, it’s important to already bring awareness to these issues,” US coach Gregg Berhalter said.

“And that’s what Be the Change is about, it’s not just stateside that we want to bring attention to social issues, it’s also abroad. And we recognize that Qatar has made strides, there has been a ton of progress, but there’s still some work to do. And it’s just about Be the Change basically represents everyone’s individual opportunity to make change or to have change start with them. So I think it’s appropriate that we have it here, as well.”

The USSF said the rainbow crest will not be worn on the field but will be used in areas in Qatar it controls, such as fan parties.

Last spring, the US wore jerseys with rainbow-coloured numbers for Pride Month and wore orange armbands to raise awareness against gun violence.

FIFA President Gianni Infantino and Secretary General Fatma Samoura sent a letter this month to the 32 national federations with World Cup teams urging them to “let football take center stage” and to “not allow football to be dragged into every ideological or political battle that exists.”

“It’s a sign of our values and what we represent as a men’s national team and US Soccer, and we’re a group that believes in inclusivity and we’ll continue to project that message going forward,” American goalkeeper Sean Johnson said.