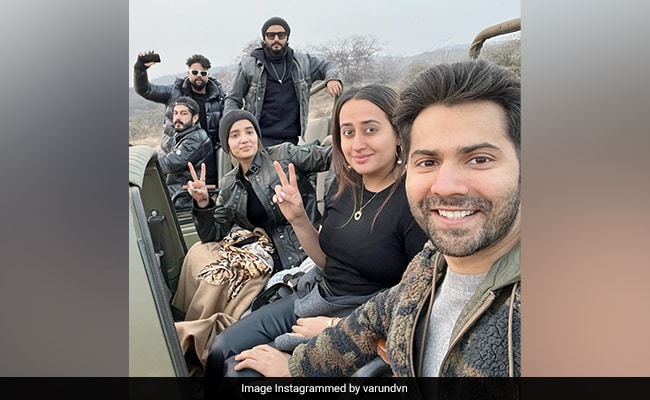 Varun Dhawan and his wife, fashion designer Natasha Dalal welcomed the new year amid a lot of love, laughter and happiness. The actor’s latest Instagram posts are proof of this. In his new upload, Varun is seen posing with Natasha and a host of friends. While the first image is a beautiful selfie of the couple, the second and third photos feature Kunal Rawal-Arpita Mehta, Arjun Kapoor- Malaika Arora and Mohit Marwah-Antara Motiwala. The gang welcomed the new year in Rajasthan. Sharing the images, Varun said, “2023. Write your own story,” with star emojis.  Replying to the post, Jackky Bhagnani said, “Looking like so much fun,” with heart emojis.

Before that Malaika Arora also shared a picture of the happy bunch and said, “Love, happiness and eternal sunshine ….. Happy 2023.”  Her boyfriend, actor Arjun Kapoor also shared a similar picture with a different caption, “Bring it on 2023.”

While in Ranthambore, Varun Dhawan shared glimpses of a tiger safari. The video begins with Varun in an open jeep, smiling at the camera. A  majestic tiger soon enters the frame. Varun Dhawan has chosen a song from The Lion King to match the video. In the caption, he wrote, “When the wolf [emoji] met the tiger [emoji],” referring to his role as a werewolf in his last film Bhediya. Arjun Kapoor replied to the post, “Nice caption, ya.” Director Zoya Akhtar replied with a red heart-eye emoji. Saba Pataudi wrote, “Wow.” Antara Marwah gushed: “What sighting.”

On the work front, Varun Dhawan was last seen in Bhediya opposite Kriti Sanon. He will feature in Nitesh Tiwari’s Bawaal opposite Janhvi Kapoor.