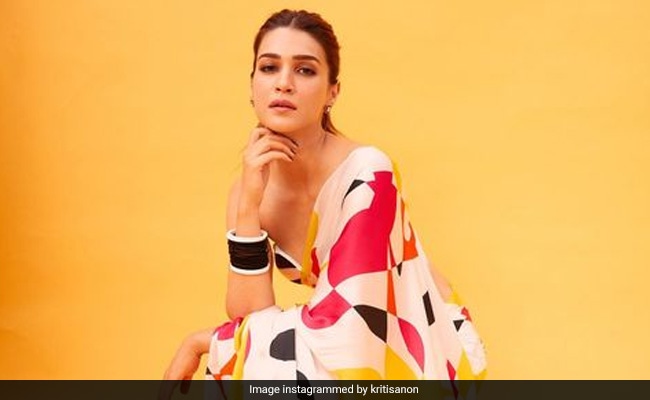 Kriti Sanon‘s latest update on Instagram is all things energetic. The actress has shared a behind-the-scenes video from one of her photoshoot sessions. From making goofy faces to requesting people to play music, Kriti clearly knows how to have fun on a workday. Don’t you agree? The video opens with Kriti striking a number of poses for the camera. She looks stunning in that digital print saree. We also got a glimpse of her make-up time. In the middle of this, Kriti comes up with a request. “Nobody is playing music. I am begging. Koi gaana bajao yaar [Please play a song].” Moments later, Kriti is seen grooving to the beats. Isn’t she super cool? Along with the video, Kriti wrote, “A little Dopamine for the day.” For the background music, she has picked the hit Punjabi song – Gin Gin Ke Dil Tod Di.

Here is the video we are talking about:

Before this, Kriti Sanon shared a couple of stills from the same photoshoot on Instagram and wrote, “Thumkeshwari Saree Spree.” FYI: Her caption was inspired by the recently released song Thumkeshwari from her upcoming film Bhediya.

In Bhediya, Kriti Sanon will share the screen with her Dilwale co-star Varun Dhawan. The horror-comedy also stars Deepak Dobriyal, Abhishek Banerjee and Paalin Kabak in crucial roles. The film will be released on November 25.

Kriti Sanon made a lot of noise after she announced her next project –  The Crew – with Kareena Kapoor and Tabu.  Sharing a picture of herself, Kareena and Tabu, Kriti wrote, “‘The Crew‘ that I’m extremely thrilled to be a part of. When so many strong-headed, powerful, independent women come together- you know it’s gonna be [fire emoji] . So excited to be working with these amazing women who inspire me every single day.” It is co-produced by Rhea Kapoor and Ekta Kapoor.

Apart from Bhediya, Kriti Sanon will be seen in Adipurush, directed by Om Raut. The film also stars Prabhas and Saif Ali Khan in lead.