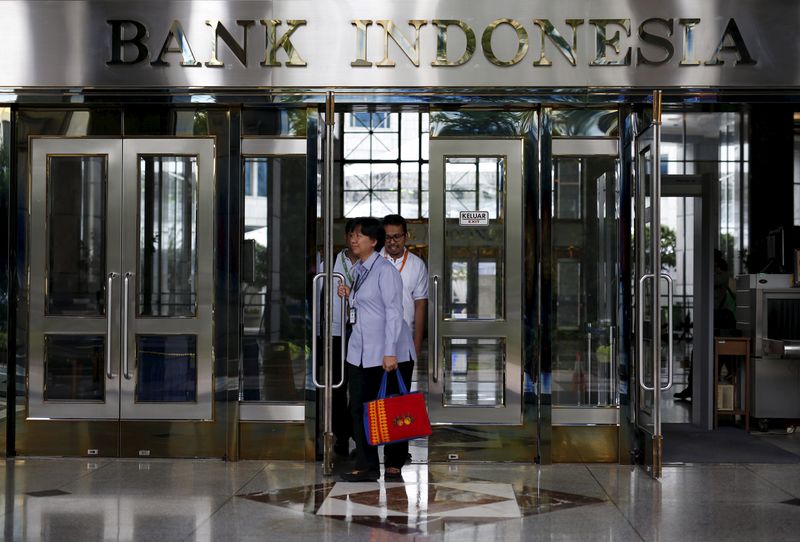 © Reuters. FILE PHOTO: People walk out of a building inside the Bank Indonesia complex in Jakarta, Indonesia December 16, 2015. REUTERS/Darren Whiteside

JAKARTA (Reuters) – Indonesia’s central bank raised its key interest rate by 50 basis points for a third consecutive monthly meeting as it sought to rein in inflation expectations while supporting the rupiah.

Bank Indonesia (BI) raised the 7-day reverse repo rate to 5.25%, as expected by the majority of economists polled by Reuters. It also raised its other policy rates by the same amount.

The “front-loaded, pre-emptive, forward-looking” measure was made to guide core inflation back within target in the first half of 2023, and also step up support for the rupiah, he said.

With Thursday’s move, BI has increased interest rates by a total of 175 bps since August, matching the scale of its last tightening cycle in 2018.

The rupiah was largely unchanged after the decision. It has fallen nearly 9% against the dollar in volatile trading in recent months, as the greenback has been buoyed by the Federal Reserve’s aggressive monetary tightening.

While Indonesia’s inflation rate eased to 5.71% in October, it remained above the BI’s 2-4% target range for the fifth straight month and near a seven-year high of 5.95%.

Some economists expect inflation to accelerate further towards the end of the year, after the government raised subsidised fuel prices by about 30% in September.

The bank’s decision came after data showed Indonesia’s economy expanded 5.72% from a year earlier in the third quarter, the fastest pace in over a year.