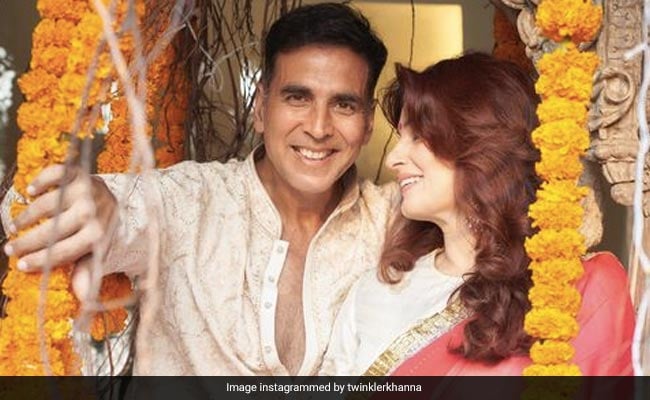 Twinkle Khanna in her recent Instagram post shared her experience of what it’s like to return to the university to do her masters and how she turns into a “giddy teenager” when her husband Akshay Kumar comes to pick her up. On Thursday, the actor shared an adorable video of herself, which also featured her husband and actor Akshay Kumar with the text, “When he comes to investigate where I study and what I am really doing at the uni.” She captioned her post: “What’s it like to be an older student going back to university to do my Masters? I feel like my mind has been thrown into a washing machine every day and it’s a delight to walk around with squeaky clean ideas. There are evenings when I am working on my assignments and the kids are working on theirs-on our dining table with papers strewn across and shared pencils.”

Sharing her experience of how she feels when she has her husband Akshay Kumar picking her up, the actor wrote, “I turn into a giddy teenager when my husband come to pick me up from university.”

She ended her caption with, “Drop a heart if you also believe that it’s never too late to do anything at all.”

In the video, Twinkle Khanna can be seen walking in the university’s corridor with her backup. In the video, we can also see a still of the couple.

Twinkle Khanna, who is the author of the book Mrs Funnybones, The Legend of Lakshmi Prasad and Pyjamas Are Forgiving, often shares posts on Instagram handle, sharing her many experiences with her followers.

Check out a few of her posts here:

Twinkle Khanna, who is the daughter of late actor Rajesh Khanna and Dimple Kapadia, is married to actor Akshay Kumar. Twinkle has formerly worked in Bollywood films Baadshah, Mela and Zulmi among others.

She left Bollywood after marrying Akshay Kumar in 2001.

Anushka Sharma And Virat Kohli, Twinning And Winning At The Airport