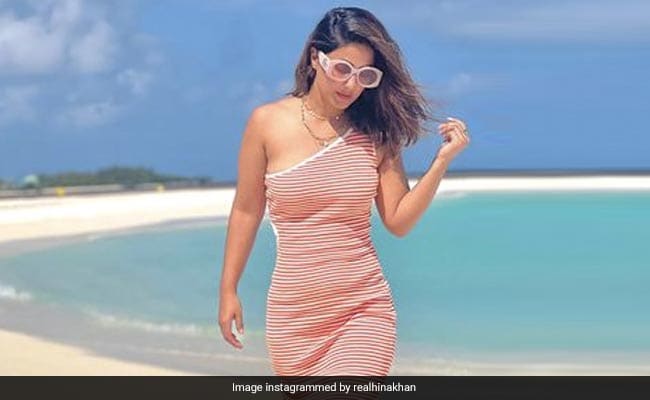 TV star Hina Khan was missing the beach big time. So she posted a throwback picture of herself from a beach destination. In the pictures, Hina can be seen chilling on the beach, dressed in a breezy outfit. Hina accentuated her look with OTT sunglasses. She captioned the post: “Kinda missing beaches.” She added the hashtags #throwbacktuesday yo her post. In the comments section, Sophie Choudry wrote: “I know that feeling.” Hina Khan’s Instagram profile is one giant travel postcard. The actress loves to share pictures from her holiday.

Hina Khan, a popular name in the Hindi television industry, became a household name after she featured as Akshara in the popular television show Yeh Rishta Kya Kehlata Hai. The actress was also a part of Kasautii Zindagii Kay 2, in which she played the antagonist Komolika. However, she quit the show after a few months. She also participated in television reality shows like Khatron Ke Khiladi season 8 and Bigg Boss 11.

In terms of work, Hina Khan was also seen in a brief appearance in the TV show Naagin 5, in which she starred as the titular shape shifting serpent. The actress stepped into films with Lines, the poster of which was unveiled at the 72nd Cannes Film Festival in May, 2019. She attended the Cannes Film Festival this year too.