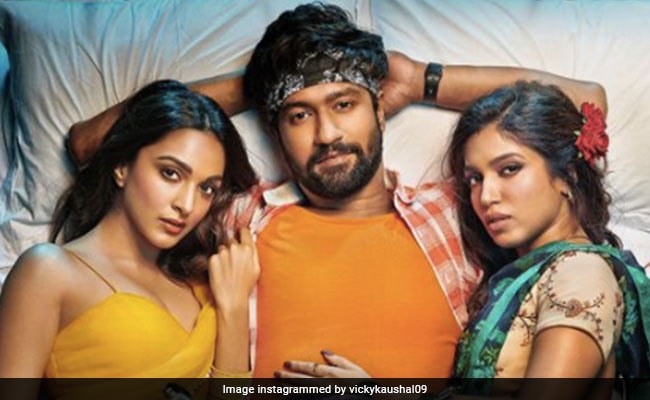 Vicky Kaushal is back to entertain us in a never-seen-before avatar with his next film, Govinda Naam Mera. The movie that is touted to be a comedy will skip theatres and have a direct-to-OTT release. Now, the release date of the movie on the streaming platform DisneyPlus Hotstar has been announced by Karan Johar along with character posters of the three lead actors Vicky Kaushal, Bhumi Pednekar and Kiara Advani. The film will be released on December 16 and features Vicky in the role of a background dancer. The actor’s poster features him in a rustic look, dressed in a pair of jeans, ganji and shirt. The poster also contains the name of the character Govind Waghmare.

Meanwhile, Bhumi Pednekar and Kiara Advani’s posters do not have their character names but instead focus on who they are in Govinda’s life. Bhumi is seen seated on a wing chair looking alluring. The text read, “Govinda ki hotty wife.” Kiara, dressed in a fun printed co-ord set, is all smiles on the poster. She is “Govinda ki naughty girlfriend.”

Karan Johar’s caption suggests that the film is going to be a fun ride. In the caption, the producer said, “Hero, his wife and his girlfriend – what could possibly go wrong, right? A lot it seems. Get ready for some murder, mystery, madness and masala.”

A few days ago, Vicky Kaushal and Karan Johar announced that the film will be released on an OTT platform in a hilarious video. The clip begins with the two discussing Vicky’s successful career but Karan quickly adds that the actor has always been seen in intense roles.  Referring to the famous dialogue from Vicky’s breakthrough film Masaan, Karan Johar, “Dukh tera khatam hi nahi hota,” encouraging Vicky to explore his fun side.

Karan Johar then slips into the premise of Govinda Naam Mera. Vicky is initially thrilled thinking it is a biopic on Bollywood icon Govinda but Karan quickly tells him that it is a story of a background dancer Govinda Waghmare. Govinda has a host of problems – rising debts, a wife who cheats on him and occasionally beats him up and a girlfriend.

The prospect of a girlfriend in Govidna’s life cheers Vicky Kaushal up, given that it allows for a “Yash Chopra-style” romantic song. But Karan Johar says that all he will get is to dance in the Mumbai rains.

On the work front, Vicky Kaushal will also be seen in Meghana Gulzar’s Sam Bahadur and Laxman Utekar’s next project with Sara Ali Khan.

What’s Not To Like About Saif Ali Khan’s Look