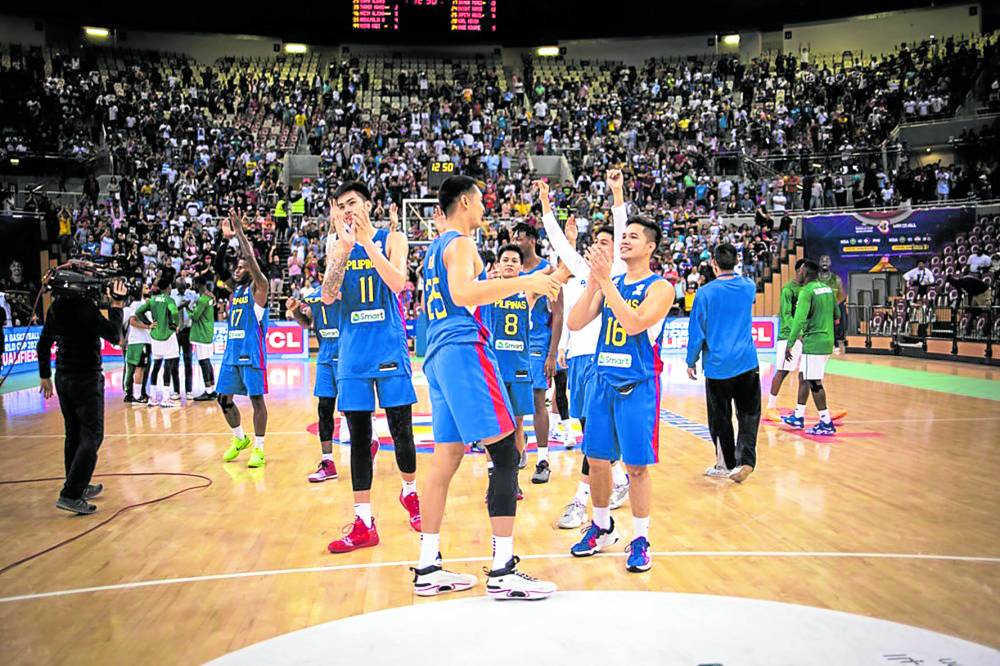 Playing with poise right from the jump, Gilas Pilipinas held off pesky Saudi Arabia, 76-63, to emerge undefeated in the fifth window of the Fiba (International Basketball Federation) World Cup Asian Qualifiers and show the improvements coaching staff had been talking about as the Nationals continue to make great strides leading to the main event next year.

Heroes abounded once again for the Filipinos, who frustrated the retooled hosts that were eager to annex a second straight win after drubbing the visiting Indians three nights before—and save some face after taking an ugly drubbing from a Jordan Clarkson-led Gilas crew last August.

“We knew the high quality of this (Saudi Arabia) team, so we had mentally-prepared ourselves to struggle especially coming from a tough game in Jordan,” national coach Chot Reyes said.

“We stayed patient through our early struggles.”

RR Pogoy scored 11 of his 13 points in the third period where the Nationals took control, and Kai Sotto was a dominant force inside with 11 points, nine rebounds and five blocks against a Saudi front line that was far bigger and better than the Filipinos mauled black-and-blue at Mall of Asia Arena close to three months ago.

The Nationals got a sort of home feel from a large Filipino gallery that came out to support Gilas. Saudi Arabia has one of the highest number of overseas Filipino workers, and they shouted their hearts out for their hometown heroes at King Abdullah Sports City in Jeddah Sunday night (Monday morning in Manila).

“We got energy from the crowd who gave us a huge boost and did not allow us to lose until we hit our stride and hit our shots,” Reyes went on. “We were able to use our defense, essentially, to pull off the victory.”

Dwight Ramos also finished with 13 points and the Philippines looked much more deliberate and decisive, a far cry from the disjointed lot that played in the early stages of the qualifying stage the country is using to see which combination of players could best represent the country in August next year.

Pogoy and Ramos buckled down in the middle quarters as Gilas used a 12-0 spurt to create separation—one that the Nationals held on to the rest of the way.

Saudi Arabia threatened to come back in the final frame, pulling within 69-61 with 2:08 remaining, only to be denied with plays from both Thompson and Ramos.

The latest victory over the Saudis not only hiked the Philippines’ record to 5-3 and marked the first time Gilas was able sweep a qualifying window.

It showed that the Nationals, having generated enough cohesion, can truly become a capable bunch.

This was something highlighted by Reyes, shortly after rolling past Jordan in Amman last Friday: “I think No. 1 was familiarity. It’s not the first time that we’ve come together. Yes, there were new faces we wanted to assimilate, but by and large, these guys already had some shared experiences … so I think it manifested itself—the energy and the vibe.”

The Falcons, billed as the tournament dark horse, later defeated New Zealand, 92-75, dealing the Tall Blacks their first-ever loss in the showcase, which should help underscore the improvements—visible and otherwise—the Gilas program has made thus far in these Qualifiers the cage leaders are using in preparation for the World Cup here next year.

Gilas figures in one more qualifying window in February next year.

There, the Nationals will host red-hot Lebanon and then Jordan where Justin Brownlee, who is a candidate for naturalization, could be activated.

“Hopefully, we can bring him in for the sixth window. I know it’s a bit tight, but we’re getting support from the Senate and Congress. There [are] just a few documents we have to submit,” Samahang Basketbol ng Pilipinas president Al Panlilio said of Brownlee’s naturalization process. INQ