Argentina megastar﻿ Lionel Messi has shot down fears of poor fitness on the cusp of his side’s World Cup opener against Saudi Arabia tonight.

The captain sparked concern when he was absent from a team training session open to the media at the weekend.

But Messi insists he’s ready to fire in what looms as his final World Cup campaign.﻿

“I feel very good physically. I think I’m in a great moment, both personally and physically, and I don’t have any problems,” Messi said.

“I heard that they said I trained differently. It was because I had a knock, but there is nothing strange (happening); it was just a precaution.”

Messi is now 35 and set to contest his fifth World Cup.﻿

“I didn’t do anything special,” he said of his build-up.

“I took care of myself and worked as I have done all my career, knowing that this is a special moment, as this is probably my last World Cup, my last chance to achieve this great dream that I have, that we all have.”

Messi and Portugal superstar Cristiano Ronaldo are both gunning for their first World Cup titles in the twilight of their legendary careers.﻿ 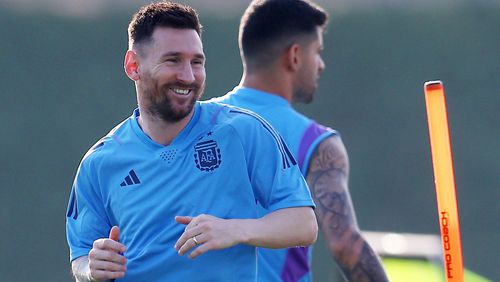