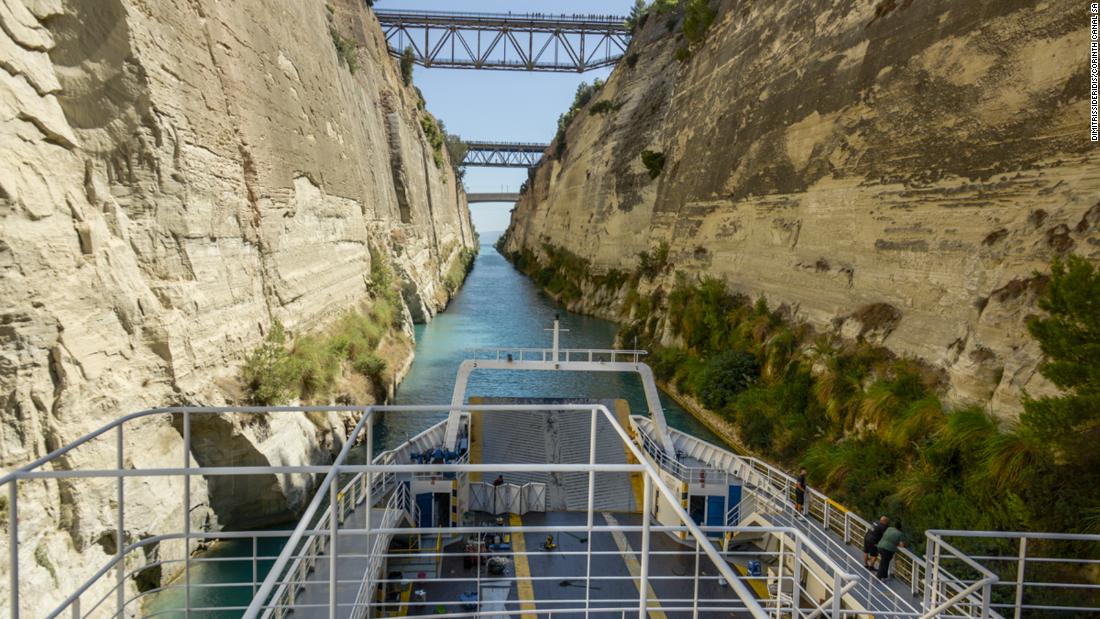 (CNN) — Under the blue skies of Greece, a giant vessel slowly makes its way through the rocky walls of a narrow, artificial waterway, with just a few inches to spare on either side, while those on board take in the engineering marvel in front of them.

The very first sailings through the Corinth Canal, one of the most significant infrastructural feats the world had ever seen, took place in 1893, fulfilling a vision that had been at least 2,500 years in the making.

The canal cut through the isthmus of Corinth in Greece, linking the Ionian Sea with the Aegean, effectively turning the Peloponnese peninsula into an island, and creating an international maritime hub that transformed navigation in southern Europe.

Crucially, it saved ships the nearly 321-kilometer (300 mile) journey around the plane tree leaf-shaped cape, allowing them to reach ports further east much faster and safer.

Greece’s Corinth Canal has become a top attraction for tourists, as well as a crucial navigational route.

“It was a complex and challenging undertaking,” George Zouglis, general manager at Corinth Canal SA, told CNN of the bisecting of the isthmus.

“Without a doubt, one of the greatest engineering achievements of its time that used the most advanced available technology.”

Now a hugely popular destination, it’s the second most-visited tourist landmark in Greece today, according to Zouglis, attracting people from all over the world

In fact, up to 12,000 commercial and tourist vessels registered in some 60 countries travel through the Corinth Canal, which is currently closed while restoration work is carried out, every year.

Basketball legend Earvin “Magic” Johnson was among the many visitors to cross the canal last summer.

The tidal waterway is usually open 24 hours a day, except between 6 a.m. and 6 p.m. on Tuesdays when maintenance work is carried out.

Certain vessels, including those exceeding 800 net tonnage or carrying potentially dangerous cargoes, must be towed by tugboats, with canal pilots assisting in the passage.

Non-mariners can use railway, highway and freeway bridges to cross the canal, with two submerged bridges which rise out of the water at either end to allow road traffic to cross between passing ships. But whatever way you’re crossing the Corinth Canal, the sight is majestic.

“It is impressive both when you’re looking at it from above and when you’re standing in it, seeing this vertical line [rising from the water],” adds Zouglis.

The prospect of digging a canal across the narrow isthmus had been floating around for more than two centuries before the project came about, with various stops and starts.

Due to the narrowness of the canal, some of the vessels need to guided by canal pilots.

The first person credited with the idea is Periander, one of the Seven Sages of ancient Greece and the ruler of Corinth in the late seventh century BCE.

Accounts from the time say his plan was abandoned after Pythia, the high priestess of the Temple of Apollo at Delphi and the god’s mouthpiece, proclaimed that such an endeavor would incur “the Gods’ wrath”.

What’s more likely though is that the project was shelved due to the enormous technical challenges, as well as certain financial interests in Corinth, a strategically located city that rose to become one of antiquity’s most eminent commercial and political centers.

Much of the wealth of Corinth is believed to have come from the high duties paid by merchants in order to gain access to “Diolkos,” a stone-paved road that allowed vessels — greased with animal fat and mounted on wheeled carriages — to be dragged overland from the Gulf of Corinth to the Saronic Gulf, thus avoiding the circumnavigation of the Peloponnese.

Vestiges of the famous trackway can still be seen on the isthmus today.

Interest in a navigable canal was revived some 300 years later by Demetrius I Poliorcetes (known as “the Besieger”) but it’s claimed that he backed out after engineers erroneously advised him that creating a watercourse would risk flooding the islands in the Saronic Gulf due to its surface standing lower than the Gulf of Corinth.

In the time that followed, several Roman emperors including Julius Caesar and Caligula are also believed to have toyed with the idea.

But it was only during the reign of Nero, the fifth emperor of Rome who was enthroned in 54 CE, that work actually began.

Historians say the emperor himself broke ground on the ambitious project at 67 CE, using a golden pick.

Excavation works progressed significantly, but inevitably came to a halt after Nero’s return to Rome and his death the following year.

To this day, visitors sailing through the canal can admire an ancient relief carved into the giant rock dedicated to Nero.

One of the canal’s first bitts, with the date 1898 and the initials E.D.K. (Corinth Canal Company) engraved, is still in tact today.

As centuries rolled by, the Byzantines, Venetians and others also explored the concept — but efforts never went very far.

The idea gained traction again after the Greek War of Independence in 1821, but the newly independent state could not afford the cost of undertaking such a project.

However, the opening of the Suez Canal in Egypt in 1869 revitalized discussions and on April 23, 1882, work began once again.

“It’s worth noting that the blueprints that were used were essentially the same as those put forward by Nero,” Zouglis notes.

“That is, Nero’s route was considered as the most economical and most advantageous for the construction of the modern canal.”

During the next 11 years, a total of 12 million cubic meters of soil would be extracted to create an 8-meter deep canal that crosses the isthmus in a straight line at a length of 6,343 meters.

Overall, some 2,500 people worked on the construction of the project, using cutting-edge machinery imported mainly from France.

The inauguration of the project on July 25, 1893 took place amid much pomp and ceremony, with Greek and foreign dignitaries present and celebratory cannon fire from anchored vessels.

In the decades that followed, the Corinth Canal became a major hub with a “priceless” navigational value for vessels heading from the Adriatic Sea, the Ionian and the western Mediterranean to ports in the Black Sea and eastern Mediterranean, and vice versa, Zouglis said.

Occasionally, it would shut down as a result of erosion and landslides. In 1923, 41,000 cubic meters of soil fell into the canal, bringing about a two-year closure.

Up to 12,000 commercial and tourist vessel travel through the Corinth Canal every year.

But the largest disruption so far happened back in 1944, when departing Nazi German occupying forces threw a large number of railway vehicles into the canal and proceeded to blow up its slopes and bridge.

A massive 60,000 cubic meters of soil cascaded into the canal as a result, shutting it down for five years.

While it remains an important navigational route, the canal’s width at sea level is 24.6 meters and at its bottom 21.3 meters, making many vessels today too wide to cross it, while the two striking vertical slabs of rock framing it reach up to 79 meters above sea level.

In 2019, 22.5 meter wide cruise liner Braemars squeezed through the tidal waterway, becoming the longest boat to make the journey, according to cruise company Fred Olsen.

Unfortunately, the canal was shut again in 2021, this time due to landslides, and a €32 million ($32 million) restoration project was put in place.

While it reopened to shipping after 18 months, Greek authorities announced in October that the canal would closing until the following summer for the second phase of restoration works.

According to the Corinth Canal Company, it managed to operate without interruption during the summer of 2022, recording its most successful performance in 20 years.

“In particular, tourist and commercial ships of more than 70 different nationalities were served and the total amount of crossings was amounted to approximately 6,000,” reads a statement from the company.

Over the years, the Corinth Canal has also become a favorite with adrenaline seekers, who can experience an exhilarating thrill ride by bungee jumping off a platform at about 80 meters above sea level.

Officials are now aiming to improve tourism infrastructure around the structure in order to attract further interest in the region.

Plans to open a museum and a digital site showcasing artifacts reflecting the canal’s long and complicated history are underway ahead of an anticipated 2024 launch.

The exhibits will include historical photographs, artworks and documents, as well as machinery and other items used in the decades since the opening of the canal.

“We want to highlight the cultural and highlight value of the canal — one that comes from ancient times,” adds Zouglis.