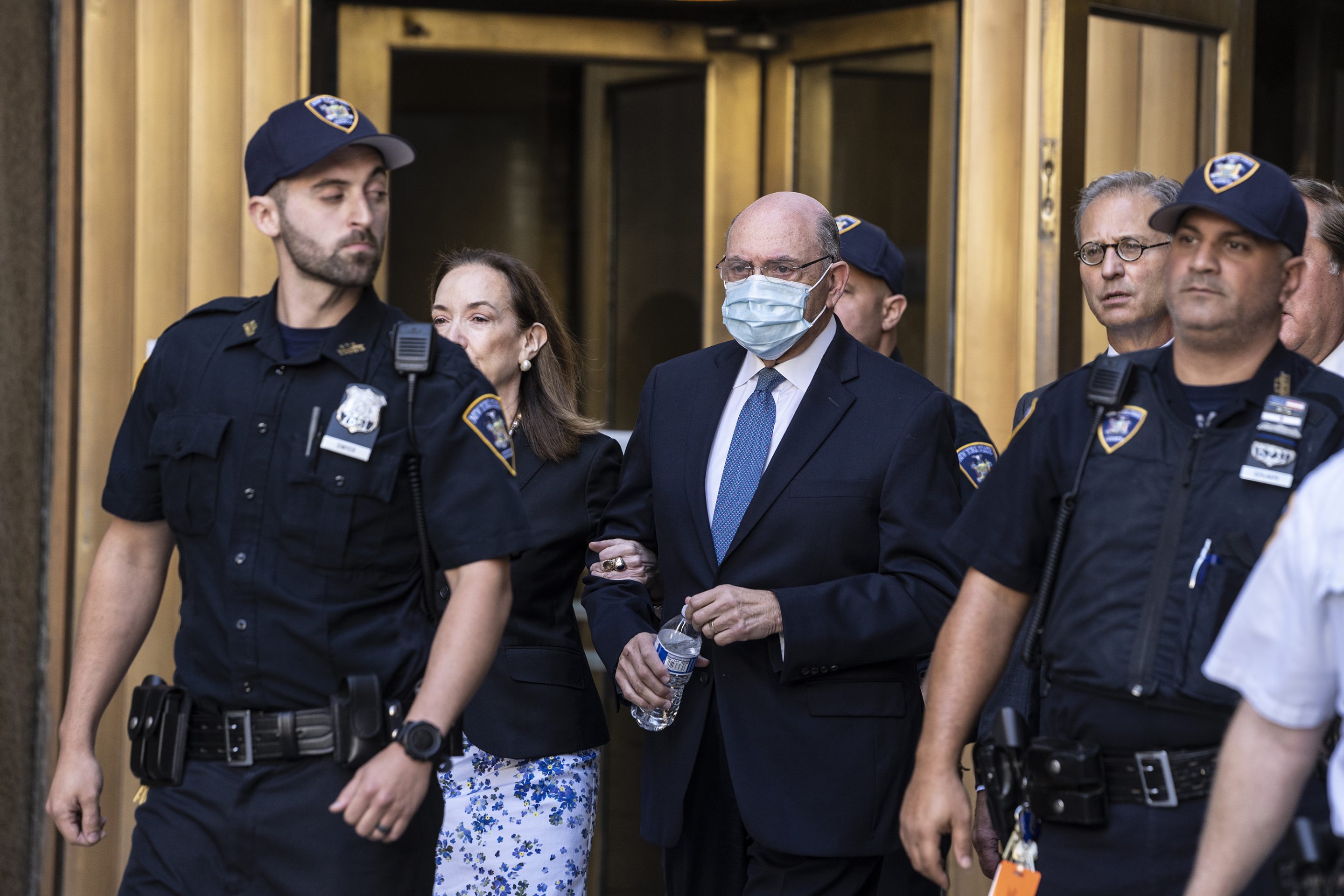 The highest-ranking Trump Organization executive to be charged in an alleged criminal tax fraud scheme told the jury that soon after he pleaded guilty, the firm knocked his title down and booted him off the prestige floor on which Donald Trump worked.

Former chief financial officer Allen Weisselberg, the prosecution’s star witness in the trial of two Trump companies, took the stand Tuesday in state court in Manhattan in a charcoal suit and blue tie. Weisselberg, 75, said that after entering his plea in August and agreeing to testify against the companies — which are accused of hiding taxable income inside luxurious perks  — his title was reduced to senior adviser.

“My location changed as well,” he told the jury, under questioning by Executive Assistant District Attorney Susan Hoffinger, explaining that he lost his perch on the 26th story of Trump Tower and was moved down a floor. He then described a party that Trump Organization executives nevertheless threw for him.

“Much to my regret,” Weisselberg said, “my son wanted to make sure I had a birthday party” and arranged for it at Trump Tower.

“It was a small birthday cake,” he added.

But even after pleading guilty to the entire 15-count indictment against him, including charges of conspiracy and tax fraud, Weisselberg is still drawing his full, $640,000 salary and hopes to collect his $500,000 bonus in January, he told the jury.

Prosecutors are trying to show that the alleged tax fraud scheme at the Trump companies wasn’t secretly hatched by Weisselberg and Controller Jeffrey McConney, as the defense contends, but part of the firm’s entrenched business practices. Trump himself, who isn’t charged, has called the trial a baseless vendetta.

During his first day on the witness stand, Weisselberg presented a stark contrast to McConney, the DA’s first witness, who faltered and was so evasive that the judge on Monday declared him a hostile witness, giving prosecutors more latitude in questioning him. Weisselberg, by contrast, seemed at ease as he told the jury how he received perks and bonuses.

Weisselberg said he reaped a host of benefits totaling about $1.7 million, including an apartment with a garage, and his-and-hers Mercedes Benzes to go in it. He testified that he also received unreported cash and got various personal expenses for his homes and his son’s apartment covered, including flat-screen TVs and new furniture. These items should have been taxed like income.

Between 2005 and 2017, Trump Corp., one of the two companies on trial, paid almost $1.2 million in rent for an apartment for Weisselberg and his wife, according to the DA. Weisselberg explained to jurors Tuesday that the perk came about after his wife became ill and moved to Florida. Trump offered him an apartment on Manhattan’s Upper West Side to be nearer the office, he said.

“Donald knew I was going home to an empty house and nobody was there,” Weisselberg told the court. “He said, ‘Move into the city instead of spending three hours on the train.’”

Why Not a Raise?

Hoffinger asked Weisselberg why he didn’t just ask for a raise. Weisselberg said he was helping the company save money.

“In order to get a raise, the Trump Corp. would have had to give me double the amount, because taxes would’ve been withheld,” he said.

Under the terms of his plea agreement, Weisselberg must testify truthfully and is hoping for a sentence as brief as 100 days in jail, according to his lawyer Nicholas Gravante, rather than the maximum 15-year prison term he otherwise could face. He continues his testimony on Thursday, when the trial resumes.