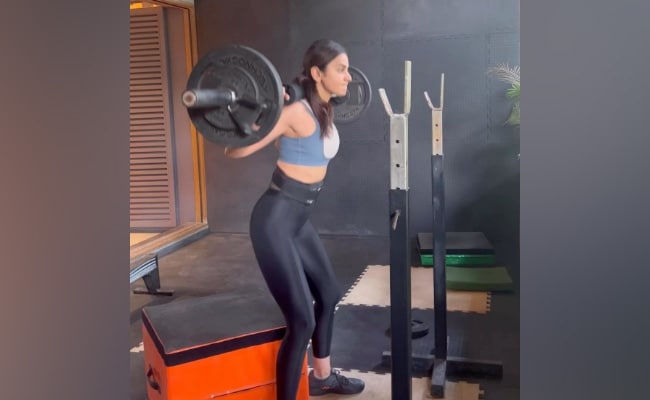 A still from the video. (courtesy: rakulpreet)

Please don’t disturb, Rakul Preet Singh. She is busy with her “Sunday burn” session. Oh yes, the actress has shared a video from her gym session. From leg press to weight squads, the actress does it all with utmost ease. She makes it look so easy. For the background music, Rakul Preet has picked the song – ​​Cum Check This by Fetish. Her caption read, “Sunday burn done right.” Replying to the video, Stylist Geetika Chadha wrote, “My baby strongestttt.” Actress Pragya Jaiswal picked a set of fire emojis. Fans too have flooded the reply box with fire, red hearts and heart-eye emojis.

Before this, Rakul Preet Singh shared some stunning pictures of herself in a blue power suit and wrote, “You never lose or win .. you always learn.”

Oh, and, then there are days when Rakup Preet Singh gives major fashion goals. Here, she is wearing a white corset top with floral denims. According to Rakul Preet, this is her “when in doubt get your sassy pants on” look.

At times, Rakul Preet Singh shares some thoughtful notes with her Instagram family. “Life is a painting and you are the artist,” the actress wrote.

Rakul Preet Singh was last seen in Thank God. The film, directed by Indra Kumar, was released on October 25. Ajay Devgn and Sidharth Malhotra are also part of the film. Rakul Preet plays Ruhi Kapoor, a police officer, in the movie. At the time of introducing her character, the actress wrote, “Iss Diwali, Chitragupt khelenge a game of life with my better half, jahan hoga unke karmon ka poora hisaab.”