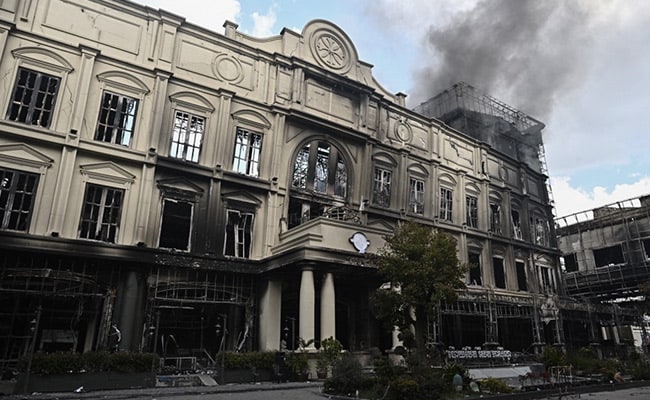 Many more are feared dead as rescue efforts continue.

At least 19 people were killed and many others are feared dead in a fire at a Cambodian casino, with a rescuer describing how victims hurled themselves from a ledge in a desperate bid to escape the flames.

The blaze at the Grand Diamond City hotel-casino in Poipet, within view of the Thai border, broke out late Wednesday night, Cambodian police said.

“There are 19 dead so far as we see bodies and bones,” said Sek Sokhom, director of Cambodia’s Banteay Meanchey provincial information department, warning the “figure could be higher” as rescuers have not yet reached parts of the complex.

A volunteer with Thai rescue group Ruamkatanyu Foundation who wished to remain anonymous said his team arrived at around 2 am (0730 GMT) and saw people jump from the building.

“I witnessed people running out of the building to escape from the smoke,” he said, adding that a group were also packed onto a rooftop to avoid the flames.

“Then we saw some people jumping down,” he said.

Video showed the building consumed by flames, with firefighters struggling to contain the blaze and rescuers attempting to pluck people from a burning ledge.

In one clip, an unidentified man is seen sitting on a window ledge as smoke billows out from behind him. In another, a group of people huddle on a ledge as flames draw near.

A Thai foreign ministry source said they had been coordinating closely with local authorities, “including by sending in fire trucks from the Thai side”.

Sa Kaeo Governor Parinya Phothisat said another roughly 60 people caught up in the fire had already been checked and cleared by Thai hospitals.

The Ruamkatanyu Foundation volunteer said the blaze started on the first floor but spread quickly along carpets, leaping up through the multi-storey building.

Naphat Klonkliang, an officer with the foundation, told AFP they had retrieved two bodies.

“The rescue team were struggling in the beginning and the main reason was the smoke,” the officer said.

Cambodia is one of Southeast Asia’s poorest countries and its citizens are officially barred from gambling in its casinos.

But there are numerous hotel-casinos clustered along the Thai border, with Poipet a popular holiday destination for visitors from Thailand, where most forms of gambling are also illegal.

The blaze follows two other fatal incidents in entertainment venues in Thailand and Vietnam this year.

In August, a fire broke out at a Thai nightclub, killing 26 people and injuring scores more.

The following month a blaze in southern Vietnam killed 32 people at a karaoke bar.

Concerns have long been raised over the region’s lax approach to health and safety regulations, particularly in its countless bars, nightclubs and other entertainment venues.

A massive inferno erupted at a New Year’s Eve party at Bangkok’s swanky Santika club in 2009, killing 67 people and injuring more than 200.

The owner of Santika was jailed for three years over the blaze, which began when fireworks were set off as a rock band played on stage.

That’s Not How You Load A Gun. Video Of UP Cop’s Epic Fail Is Viral