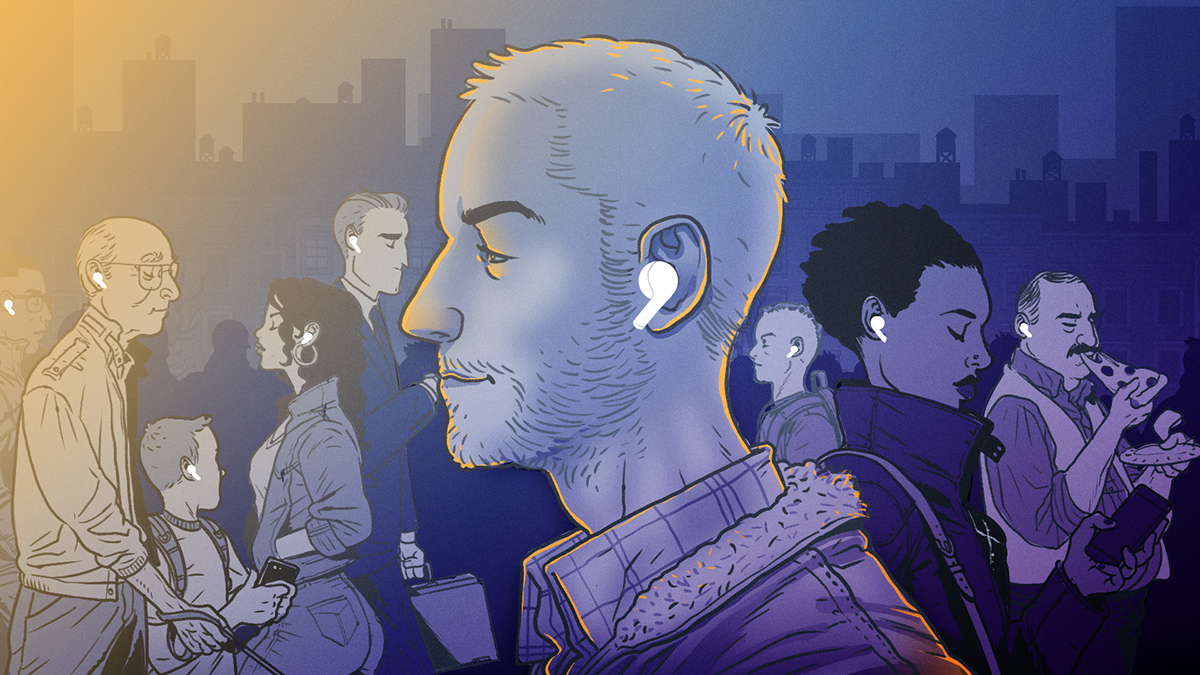 Do you prefer your true crime to be a little less…murder-y? Do you love a story about someone who cons people like it’s their job (because it is)? Are you fascinated by the intricacies of pulling off the perfect scam?

Maybe your obsession with scamming began with fraudsters who ended up with Netflix deals like Dirty John, the tale of Debra Newell, whose new boyfriend John Meehan was too good to be true in the worst way possible. Or maybe it was with the tiny pinprick of Elizabeth Holmes and Theranos. Or Anna Sorokin, who defrauded her way into the upper echelons of society.

Podcasts about cons and the people who carry them out abound right now. So we’ve compiled a list of the best true crime scammer podcasts out there, everything ranging from the hilarious to the deeply unsettling to the mysterious and yes, even the highly fibrous.

Laci Mosley’s podcast about scams is on many “best of” lists, and there’s a reason for that. Every week, Mosley dissects the art of the con alongside a guest comedian.

The show has three parts: scams to watch out for, in which Mosley reads emails from listeners (members of her CONgregation) who have fallen victim to a con, followed by a dissection of a historical con, and concluding with hearing from her guest about cons they’ve been involved in, willingly or not, and every episode culminates in telling us the story of the Scammer of the Week.

Don’t miss out on this one—you’ll laugh your face off.

The good news: In the news more than ever is catfishing, the practice of creating a fictional persona, usually on social media, with the intention of targeting someone for money or just to be awful.

The bad news: People are still catfishing other people, even their relatives. Sweet Bobby is the story of British radio presenter Kirat Assi, who spent almost a decade in the grip of a scam perpetuated by “Bobby,” who—spoiler alert—turned out to be her female cousin, Simran Bhogal.

While the fact that Assi’s catfisher was a family member is shocking, knowing that going in doesn’t take away from the experience of listening. Sweet Bobby isn’t only a story about being scammed, it’s a story of communities and their norms, victim blaming, and the question of whether or not justice is ever really achievable.

If you’re fascinated by stories of fraud and also love a good TikTok, Scamfluencers is the podcast for you.

Hosted by Scaachi Koul and Sarah Hagi, each episode is a look at an influencer whose life we can’t help but envy, and who also convinces us to make them richer, at our own expense. There are imaginary luxury resorts, predatory yoga instructors, fake royals, and even the downfall of a Real Housewife.

Scamfluencers is a charming combination of sobering and funny, and it might have you checking your Instagram even more often, and with more skepticism.

Who doesn’t love a good pyramid scheme, otherwise known as Multi-Level Marketing? Well, a lot of people, probably, especially those victimized by them.

Season One of The Dream goes deep into the world of MLM, including its history, strategies, downfalls, and host Jane Marie’s personal connections to the scams—many of her female family members eat, breathe, and sleep them. It’s a cozy and disarming examination of gender, socioeconomics, and relentlessly striving for success, even when it comes at the expense of your loved ones.

Season Two is also a great listen. It dives into the world of wellness, including essential oils, crystals, pills, powders, and other routes to becoming your most productive, most attractive, healthiest self. But is any of it regulated? Is it safe? And if we really can dietary supplement our way into living forever, at what cost?

Hosted by New Yorker writer Maria Konnikova, The Grift is a disturbing trip into the minds of con artists. From psychics to cults to art fraud and beyond, this podcast has something for everyone who wants to know how you get started in conning, how you sustain the con, how you get caught, and how you ruin people’s lives.

It’s not an Idiot’s Guide to Scamming, though. Instead, each episode is a reminder that anyone can be lured into a scam, as long as the con artist can get them to let down their guard, by pressing down on the parts that are most tender.

In “The Religion of the Black Dog,” Konnikova draws a direct and sturdy line between a scam and a cult. People are certain they’re too smart to fall for both, but it’s merely a matter of meeting the wrong person at the wrong, or maybe right, time. It’s not a matter of intelligence, The Grift reminds us that it’s the fact that everyone is lonely and vulnerable at some point, and that’s when the scam swoops in.

“Everyone is so happy and so goddamn full of fiber!,” declares Casey Wilson, the host of Fed Up.

Of course, that means things were about to go downhill fast for Tanya Zuckerbrot. The celebrity dietitian and founder of the F-Factor diet promises “permanent” weight loss while maintaining a feeling of fullness, achieved by stuffing yourself with fiber (35 grams daily, 10 more than what’s recommended for women) in the form whole grains, nuts, vegetables, and obviously, F-Factor bars and supplements.

Fed Up follows the ongoing feud between Zuckerbrot and influencer and entrepreneur Emily Gellis. Gellis said she experienced a scary side effect after trying the GG cracker and a powder, staples of the diet, and ultimately decided it wasn’t for her. Gellis learned about the experiences of other women on the F-Factor, including reported hair loss, allergic reactions, bloating, disordered eating, and even miscarriages, as well as allegations Zuckebrot advised those on the diet to stop taking their anti-anxiety medication in order to lose weight.

She used her social media platform to collect and post the often anonymous claims of F-Factor participants who got sick. Then came the articles, the threats, the lawsuits, the trolling, the catfishing, and a tale of how the very rich, the very connected, and the very powerful can gaslight us into believing almost anything.

Kast Media’s The Opportunist zeroes in on the lives of the people we should probably fear the most: those who appear to be aggressively ordinary.

Everyone is just trying to get by, so why should we be suspicious of a family business or a small-town doctor? It’s because opportunists are waiting for just the right moment to let down the guise of normalcy and pounce on the most vulnerable people, those on a perpetual quest for family, love, self-esteem, and security, causing not only a financial disaster, but an emotional one for those on the receiving end of the scam.

Host Hannah Smith unfurls each story with an eye for detail, and it’s the attention to these details that often causes things to fall apart for the scammer. Check out the latest episode, where a Ferrari idles in front of a psychic shop for a bit too long.

AARP (yes, that AARP) really does not want us to fall for scams, so they made a podcast about it. The Perfect Scam is about popular scams (10+ seasons worth), those that are so ordinary we might not even recognize them as such.

You might know not to answer a Robocall, but what happens if you do? Have you heard about the fake COVID test scam? What about pet scammers? There are work-from-home scams, GoFundMe scams, Zelle fraud, cryptocurrency, and of course, people pretending to have terminal illnesses.

In our day to day, we’re on the verge of getting scammed all the time, and maybe it’s only by sheer luck that we manage to avoid it, but for how long?

In this Audible Original podcast, host Dov Fox, a law professor who researches the legality of genetic privacy, investigates the repercussions of deceit.

Wendy Norman noticed something was wrong with her youngest child’s mental health, but she didn’t learn until years later, via a news broadcast, that it was connected to something much larger and more sinister.

Norman and her wife Janet, along with 36 other families, had obtained sperm from Donor 9623, a man whose profile at Xytex Corp., an Atlanta-based sperm bank, led them to believe he was intelligent, ambitious, and accomplished. Not only had he lied about what degrees he had, but he’d failed to disclose that he was also schizophrenic, according to reports.

It turns out that while Xytex claimed to verify what donors told them about themselves, they reportedly didn’t, and there has been very little oversight when it comes to egg and sperm donation in general. So what happens to the families who fall victim to this particularly nefarious kind of fraud? The implications go far beyond what’s considered legal.

Cass Alcide and Taylor Davis love getting down to the nitty-gritty of the scam, especially its implications in the larger context of race, class, and gender. There’s the unbearable whiteness of the College Admissions Scandal, the entitled mess that is the Prosperity Gospel behind Jim and Tammy Faye Bakker’s Evangelical empire, and the glaring misogyny of the Hustlers scam.

Looking at scamming through a lens of intersectionality is essential to understanding how and why people get scammed, and how we might be able to prevent it before it happens. There aren’t very many episodes of Scam City, so treasure what we do have, and let the much-needed analysis make you think.